What Is Tonsilitis - Health And Medical Information 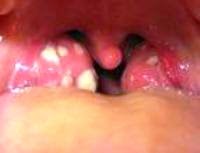 Tonsillitis is an infection of the tonsils, caused by either bacteria or viruses. Tonsils are groups of tissue, similar to the lymph nodes or 'glands' that circle the throat. This circle of tissue is part of a ring of glandular tissue around the throat called Waldeyer's ring, and the tonsils are found on either side of the back of the throat.
Their purpose is not clear-cut, but their function is probably at its peak in the first few years of life when they may assist the body to make antibodies as part of its defence against infection. Tonsillitis may be acute or chronic.

Acute tonsillitis is caused by a number of possible bacteria or viruses, with the commonest being the streptococcus bacteria, sometimes being called 'strep throat'. Viral tonsillitis is more common in the winter months, and glandular fever - which can mimic tonsillitis - is caused by the Epstein-Barr virus.

Tonsillitis is more common below the age of six, and then again in adolescence.

Symptoms Of Tonsilitis And Signs

In an acute attack of tonsillitis there is a gradual or sudden onset of a sore throat, sometimes severe, which is often accompanied by a high temperature. It is often difficult to swallow and so the sufferer may drool saliva as a result, and there may be bad breath and earache as well. The tonsils either look bright red and angry or have grey-white spots of pus sitting on their surface. The neck may appear swollen and in children there may be a slight rash over the body as a fine red rash due to the streptococcus bacterium.

In chronic tonsillitis, there is repeated infection of the tonsils and these form pockets of bacteria and infection in unhealthy tonsils. This leads not only to all the symptoms of acute tonsillitis, but small stones (tonsilloliths) are often found in these pockets. These smell offensively of rotten eggs, and give the characteristic bad breath so commonly found in chronic tonsillitis. In some cases the infection is so severe that an abscess forms around the tonsils called a quinsy, usually only affecting one tonsil. This may swell to the extent that swallowing is impossible, and either high-dose antibiotics or draining of the quinsy surgically is needed to reduce the symptoms.

Most doctors will treat tonsillitis depending on whether they believe it is viral or bacterial without any special tests. Some will take a simple throat swab to be examined in a laboratory for any bacteria, and only treat the patient if this proves to be positive for bacteria such as streptococci.

Viral tonsillitis is treated conservatively with fluids, rest, paracetamol for temperature control and gargles. Antibiotics have no place in treating viral tonsillitis.

For bacterial tonsillitis, antibiotics are added to this regime, which clear the infection within a few days. It is vital to finish any course of antibiotics once they have been started. Removing the tonsils surgically - tonsillectomy - is considered only in people with repeated infections, especially if they interfere with normal activities such as work or school. As a general guide, six or more attacks each year in children is the yardstick for surgical referral, and in adults it tends to be the effect on lifestyle rather than numbers of attacks that is important. In chronic tonsillitis, bad breath and tonsilloliths are reasons for surgery.

Viral tonsillitis will need only simple treatment as described above, and the vast majority of cases of bacterial tonsillitis get better within a few days only. In the rare cases of an abscess forming around the tonsils, this is treated by draining it either by a needle and syringe or by incision - cutting it with a scalpel and allowing the pus to drain. Long courses of antibiotics, sometimes with a brief course of steroids as well, are occasionally used to treat massively enlarged tonsils before removing them.

Tonsillectomy is performed under a general anaesthetic and the tonsils are removed from the wall of the throat, and the blood vessels attached to them are tied off. On average, around 100mls of blood is lost during this operation which is why most children are over the age of 4 before it is performed - below this, such an amount of blood lost may be considered significant. It is a safe procedure, with the usual (but uncommon) complication being bleeding from the operation site either just after the operation or 7 to 10 days later. Children recover very quickly from tonsillectomy, usually returning home within 24 to 48 hours, but adults may need 3 to 4 days in hospital to recover as well as a week or two off work when they have gone home.

Once tonsils have become chronically unhealthy there is little which can reverse them naturally, but before this point has been reached it is sensible to have a diet rich in vitamins and minerals to try to boost the body's defences against infection. It is best to seek a medical opinion about bacterial tonsillitis sooner rather than later in order to try to prevent the formation of tonsilloliths in the future.

1. Have you had similar symptoms before?
2. Do your symptoms prevent you from opening your mouth properly?
3. Are you able to swallow normally?
4. Are you losing time off school or work because of your symptoms?
5. Do you have more than 5 attacks like this every year?

Tonsilitis
By Health & Medical Reviews and News at Thursday, November 06, 2008