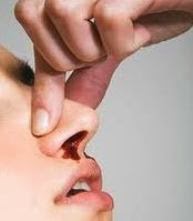 What Is A Nose Bleed?

A nose bleed, more formally called epistaxis can occur without any obvious cause. The blood usually comes out through just one nostril, although it may affect both.

Fairly obviously, loss of blood from the nose is the major symptom. Some children can sense a bleed starting before it's obvious. The child may also be aware of blood entering the throat from the back of the nose especially if they hold their head back or lie down (this can cause a bad taste).


Many nosebleeds are idiopathic - that is there is no obvious cause, or the cause is unknown. But in children frequent colds and the drying effect of central heating can cause irritation of the delicate mucous membrane that lines the nose. This becomes inflamed, crusted or cracked, and is much more likely to bleed.

Bumps to the nose, especially once it's inflamed, and vigorous nose blowing can trigger a bleed. The common childhood pass time of picking your nose can cause it to bleed. Some children just have a tendency to nosebleeds, for no obvious reason.

Rare causes include cancers and illnesses that prevent the blood from clotting properly.

Nosebleeds are described as either anterior or posterior depending on which part of the nose the bleeding comes from. Children almost always have anterior nosebleeds, from a vein (unlike older adults where it's more likely to be posterior and come from an artery).

Most nosebleeds in children can be easily treated. Keep the child as calm as possible. Tell them to tip their head forward and breathe through their mouth while you pinch the soft parts of the nose together between your thumb and index finger, just below the bony part of the nose.

Then press the pinched nose firmly towards the face. Keep this position for five full minutes (ideally ten) making sure the child's head is held up well above the level of the heart.

If bleeding persists, apply a cold pack against the face whilst still pinching the nose and get medical advice. If nosebleeds are frequent, treatment such as cautery to seal the blood vessels may be needed.