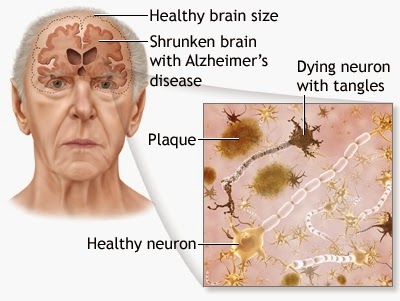 What is Alzheimer's Disease?

The term 'Alzheimer's disease' is used to describe a disease of unknown cause that leads to dementia. Dementia is a condition affecting the brain, leading to a reduction in the mental abilities of that person. This often causes problems in their ability to cope with daily activities, and to interfere with their memory and concentration. The vast majority of patients with Alzheimer's disease are aged 65 or over, and it becomes more common with increasing age.

What are the signs and symptoms?

The usual early sign of Alzheimer's Disease is a gradual loss of short-term memory - people forget where they put things or have problems remembering dates or names. This can easily happen without someone having Alzheimer's Disease (we all forget things at times) but if it happens frequently or is associated with other signs, then Alzheimer's Disease may be a possibility. These signs include;
• an inability to recognise familiar objects
• difficulty in finding the right word for a certain situation
• forgetting how simple, everyday things are used such as a radio
• forgetting to turn off the stove, or leaving doors and windows open.

There may also be slight personality changes, with unusual mood swings or angry outbursts. Agitation and anxiety can occur, as well as poor judgement and decision making. It is important to point out that every person with Alzheimer's Disease follows a unique pattern, which may take from 2 to 20 years to fully develop. Indeed, most people with Alzheimer's Disease can function very reasonably for most of their illness, remaining at home for much of it. Problems arise later in the condition, when depression or paranoia may occur and so place a strain on the carers of that person, but medication is available to reduce or stop many of the symptoms that may be experienced.

Will I have any tests or investigations?

The diagnosis of Alzheimer's Disease is made from the clinical symptoms experienced by the patient. Occasionally a CT (Computer-assisted Tomography) brain scan is used to rule out any other possible causes of a dementia-like picture, but the diagnosis is made on three levels;
¤ 1. A clinical diagnosis of dementia.
¤ 2. A subtle and slow development of symptoms, which are irreversible and documented over time.
¤ 3. The exclusion of any other possible cause of dementia using the history, examination and laboratory blood tests in each patient. 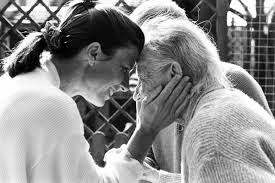 Although research into effective treatments for Alzheimer's Disease continues constantly, as far as effective drug treatment for it is concerned we are at a very early stage in its evolution. In the last few years, therapies have come onto the market which are claimed to slow down the progression of Alzheimer's Disease in its early stage only and large trials are currently in progress to evaluate how effective these are. They are, unfortunately, expensive drugs and some health authorities are reluctant to allow their use at present until the trial results are known but they tend to fall into the general category of acetylcholine-based replacement therapies.


Acetylcholine is a brain chemical which appears to become diminished in patients with Alzheimer's Disease and so it is thought that by improving the amount of this in the body, features of dementia may also improve. Some examples of these are called physostigmine and tacrine, and are usually prescribed by hospital consultants if they are prescribed. For other symptoms of Alzheimer's Disease, more well known drugs can help. If depression is a feature, then simple antidepressants can be used as in any case of depression without dementia. If aggression is a key problem, a drug called carbamazepine often helps if taken at low doses. This drug is usually given to people suffering from epilepsy but can improve agitation, aggression and wandering in some Alzheimer's Disease patients. Drug treatment however is only a small part of the picture of treatment for Alzheimer's Disease patients. There are also many home-based services available which can have a powerful effect on the lives of Alzheimer's Disease patients and their families. A brief outline is given below;

• Red Cross (loan of wheelchairs and other equipment)
• Age Concern (help with transport, visitors and sitting services).
• Alzheimer Disease Society. This is an extremely helpful organisation with local branches, and advice and practical help for relatives' and carers' groups. The address is; Gordon House, 10 Greencoat Place, London. SW1P 1PH, Tel. 0171 3060606

It is almost impossible to try and predict the clinical course of someone diagnosed with Alzheimer's Disease. Rather, it is a case of monitoring developments if and when they occur, often over a period of many months or even years rather than on a daily or weekly basis. The five main areas to watch for - in no particular order - are;

Can I do anything to help myself?

Almost every case of Alzheimer's Disease will be cared for in the community, by GPs, family and carers. It is always vital to try to get as much support as possible early in the course of the illness, and this involves not being afraid or embarrassed to mention or discuss problems that you feel you may be having. A sensible diet and moderate amounts of exercise whenever possible are appropriate, but it is usually a case of dealing with any problems as and when they occur.

1. Is there a family history of Downs syndrome or Alzheimer's disease?
2. Have you been having problems with your memory?
3. Have you been getting lost in familiar surroundings?
4. Do you have problems with getting dressed or any other simple activities?
5. Has your sleep pattern changed recently?

1. Could I have any other form of dementia?
2. Can you say how mild, moderate or severe my symptoms are?
3. Do I need to start any treatment at present?
4. What help am I entitled to ask for at the moment?
5. Do I need to inform the DVLA about my driving and diagnosis?

Neurology
By Health & Medical Reviews and News at Thursday, July 24, 2008