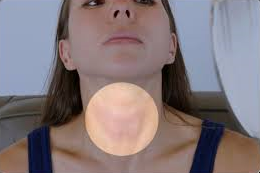 The thyroid gland is found just below the 'Adam's apple' in the neck and is responsible for producing thyroid hormones. These are vital in regulating the normal metabolism of all the body's cells, and when the level of these hormones is too high this is known as hyperthyroidism. The two most important thyroid hormones are known as T3 (triiodothyronine) and T4 (thyroxine).

There are several possible causes, the commonest being a condition called Graves' disease where there is a generalised overactivity of the whole of the thyroid gland, often causing it to become enlarged - this is called a goitre. Some families appear to be prone to Graves' disease, and it may also be triggered by stress, smoking, viral infections and radiation to the neck. The thyroid gland can also have lumps or 'nodules' within it which may themselves produce too much thyroid hormone. This is called a toxic nodular goitre. There may also be inflammation of all the gland due to viral infections or after pregnancy and this too may trigger hyperthyroidism, although this is usually a temporary condition. Any overtreatment with thyroid hormone medications can also cause hyperthyroidism.

What Are The Signs And Symptoms Of Hyperthyroidism?

Many patients with very mild Hyperthyroidism have no symptoms, and these only become apparent as the condition worsens. The usual symptoms include;

Women may experience irregular and decreased menstrual flow, and there may be hair loss and reduced concentration spans. There is often puffiness around the eyes and a typical stare, due to the upper eyelids being elevated.

Will I have any tests or investigations?

The clinical diagnosis is often suggested from the history and appearance of the patient but blood tests confirm this. The usual findings are that there is an elevated level of T4 in the body and low levels of thyroid stimulating hormone, or TSH. However, in very early levels of the illness these may still both be within the normal range. If inflammation of the gland (thyroiditis) is suspected, a thyroid scan may be taken where radioactive iodine is given to the patient in a harmless dose and an X-ray picture taken of the gland. Any excess activity of the gland shows up where the iodine is concentrated.

Possible treatments include anti-thyroid drugs, radioactive iodine and surgery. Anti-thyroid drugs such as propylthiouracil reduce the activity of the thyroid gland by blocking a step in the normal production of thyroid hormone. It takes several weeks before hormone levels begin to settle, and after one or two years it is sometimes possible to discontinue treatment but relapses may occur.

Side effects include rashes and occasional nausea. Radioactive iodine is given orally, usually once only. It has the effect of directly destroying thyroid tissue and so the patient eventually becomes hypothyroid, requiring long term thyroxine treatment.

This is an irreversible change and it takes between 2 and 3 months for a patient's thyroid gland to initially become normal after treatment before any hypothyroidism occurs. It cannot be taken during pregnancy or when breast feeding, but is a method of treatment that has been safely used for over half a century now.

Surgery is undertaken less commonly now than it used to be, but its aim remains the same - to surgically remove enough thyroid gland so that a normal amount of thyroid hormone is produced. If too much is removed, hyperthyroidism is caused, and there are also operative risks such as paralysis of the vocal cords and accidental removal of the parathyroid glands which are located behind the thyroid gland and which regulate levels of calcium in the body.

As long as it is recognized, hyperthyroidism is easily and completely treatable. If untreated however it can lead to worsening palpitations, heart failure and angina or chest pains. If this is allowed to continue, high blood pressure and increasing heart strain can become life-threatening and this is known as a thyroid crisis or thyroid 'storm'.

It is important if you are taking medication for an overactive thyroid gland to always take it regularly and in the prescribed amount. Report any unusual or worsening symptoms to your doctor, and do not smoke - this can sometimes make some of the symptoms associated with Graves' disease worse.

1. Do you feel the heat more than you used to?
2. Have you lost weight?
3. Do you have any palpitations?
4. Do you feel anxious for no reason?
5. Have you noticed any swelling around your throat?

1. Do I have to pay for my thyroid medication?
2. How quickly will I put weight back on?
3. Are there any foods I should avoid eating?
4. Will my eyes return to looking normal again?
5. How long will I need to stay under specialist care?

Hyperthyroidism
By Health & Medical Reviews and News at Saturday, August 02, 2008