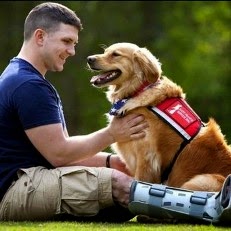 The Army is using dogs "much more" to help soldiers recovering from post-traumatic stress disorder (PTSD) according to the Army Surgeon General's special assistant for mental health, Col. Elspeth Cameron Ritchie, M.D., who spoke at the annual convention of the National Alliance on Mental Illness (NAMI).

"Animals are not just cute," Ritchie said. "They provide support."

The effectiveness of man's best friend and other animals, such as horses for equine therapy, as part of mental health care is anecdotal, Ritchie said, but it is being taken seriously and researched.

The observation came at a 2010 NAMI Convention symposium on "Veterans and Military Mental Health," focusing on the needs of returning soldiers from Iraq and Afghanistan, as well as other veterans.

Ritchie's statement was consistent with the findings of a NAMI report released last year, Depression: Gaps and Guideposts, which found that about 20 percent of people living with depression have used animal therapy in treatment, with 54 percent finding it "extremely" or "quite a bit" helpful.

In 2006, NAMI's Advocate e-magazine published an article noting that although more research was needed, Aaron Katcher, M.D., emeritus professor of psychiatry at the University of Pennsylvania, had found that "social support is a critical variable in the recovery from many serious biological disorders including psychiatric illnesses."

The 2010 NAMI convention symposium was broadcast live on C-SPAN. During the question and answer, three psychiatric service dogs named Mozart, Precious and Ozzie, patiently stood in line with their owners, who waited at an aisle microphone for a turn to speak.

The Psychiatric Service Dog Society provides information for persons living with severe mental illness who wish to train a service dog to assist with the management of symptoms.

"One size does not fit all," said Ira Katz, M.D., senior consultant for mental health services in the office of patient services in the Department of Veterans Affairs. Across the board, more research is needed on evidence-based treatment to provide a broad range of options.