Alzheimer’s Disease: Improving Life One Story At A Time - Health And Medical Information

Alzheimer’s Disease: Improving Life One Story At A Time 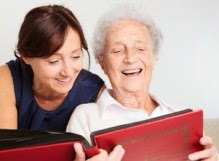 A few weeks ago, I attended Ben's funeral. I met Ben about two years ago when he and his wife began attending Memory Club (a support and education series for persons with early stage dementia). Although Ben had Alzheimer's disease, it was an unfortunate accident that took his life.

Ben's funeral was one of story-telling. Family members young and old went to the podium and shared personal experiences in their life with Ben. Later, the podium was open to anyone who wished to tell a story. For nearly two hours, dozens of Ben's friends, colleagues and students shared heartfelt memories.

Ben was a hugger who made a connection with everyone he met. This story was shared over and over. I knew this personally because I always received a hug when Ben came to Memory Club. He wanted to know how I was doing, and in our groups, Ben would pay close attention to the person speaking; curious to understand the person behind the words. Ben's hugs and his connectedness to others were reflected in many stories that day.

For several decades, Ben and his wife had opened their home and hearts to numerous foreign and minority students and families. One gentleman told the story of arriving in small-town Minnesota from the inner city of Washington, D.C., in the 1970's. It was Ben and his wife who embraced him and helped him make his way through this difficult transition.

Ben was a teacher at a local college. A gentleman from the Middle East told the story of arriving in one of Ben's college classes. As they developed a relationship, Ben encouraged him to follow his dreams rather than be confined by his own limitations.

"Because of Ben, I am now a college professor at a prestigious university," the man tearfully said. Ben had received "Teacher of the Year Award" for several years running. After a while, the students decided that they would simply have to make Ben ineligible so someone else could receive the award.
Another woman shared that while living in this country, Ben became her surrogate father. He even walked her down the aisle on her wedding day.

Many more stories were told that captured similar themes about this incredible person I was blessed to have known for the last couple years of his life. I reflected on the richness of Ben's life and how little I really knew about him.

That day at Ben's funeral I realized the importance of storytelling, life review and reminiscence - not so much as a vehicle for dwelling on the past but instead as a way to see each person in all their wholeness.

Since Ben's funeral, I have encouraged the older folks in my groups to share and listen to one another's stories. Through this process, I find participants define themselves less by their losses and more by the accumulation of life's experiences, accomplishments and relationships.

A story is so much more than a story. Sharing life stories seems to offer validation, peace, forgiveness, wholeness and acceptance - accepting oneself with where they are at the present time is a profound experience. I encourage you to ask those older individuals you love to share some stories, and then really listen. I believe we can play a privileged role in improving the quality of someone's life - one story at a time.