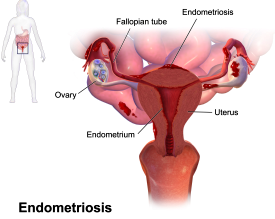 Endometriosis is said to be present when cells that normally line the womb are found elsewhere in the body, such as the outside of the fallopian tubes, the ovaries and the bladder.

These cells behave in the same way as those lining the womb so, in response to the female hormones, they grow during the menstrual cycle and bleed during a period.

It's not known exactly what causes endometriosis, but there are a number of theories.It may arise because of retrograde menstruation when, during a period, blood flows back towards the fallopian tubes rather than leaving the body in the usual way.

Immune dysfunction may allow endometriosis to develop in those women unable to fight off the endometriosis cells, or metaplasia (the process of one cell type changing into another) may enable endometriosis cells to appear in parts of the body where they wouldn’t normally be found. It can also run in families.

Symptoms of endometriosis may include painful and/or heavy periods, pain during intercourse, pelvic pain, infertility and low backache. But many women with endometriosis don't get any symptoms at all and are not aware that they have it.

Around 2 million women in the UK are thought to have endometriosis. It's most common between the ages of 25 to 40. There's no proven way of preventing it, but some women find that, following pregnancy, they no longer experience any problems.

Treatment of endometriosis can be complex and prolonged, especially in more severe disease.

Painkillers and anti-inflammatory medication may be used to relieve symptoms. Treatment may also involve hormonal drugs that suppress ovulation and menstruation, allowing the disease to regress. This is used for women who don't wish to conceive.

In more severe endometriosis, especially when drug treatments are not proving very effective, surgery may be recommended. For women who still wish to become pregnant, surgical removal of the endometriotic tissue (for example using diathermy or laser) usually with keyhole surgery, may be an option.

For those who have completed their families and for whom non-surgical treatment has not worked, there may be several possible surgical treatments which can help with symptoms, ranging from conservative surgery such as laser treatments to destroy endometriotic deposits in the pelvis to more radical treatments such as total hysterectomy with bilateral oophorectomy (removal of the ovaries) and treatment of visible endometriosis deposits and internal scarring.

Obs And Gynae
By Health & Medical Reviews and News at Saturday, January 15, 2011