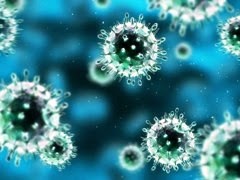 What Is Epstein-Barr Virus?

It's also known as infectious mononucleosis or kissing disease (long ago it was realised that the infection was passed on through saliva - for example, by kissing).

Glandular fever is caused by the Epstein-Barr virus. This can attack only two types of cell in the body: those in the salivary glands and white blood cells known as B lymphocytes (B-cells).

Infection begins in the salivary glands, which release large amounts of the virus into the saliva. The infection spreads to the B lymphocytes, causing them to multiply, and causing the lymph glands to swell and become painful.

Once infected, the virus remains dormant in the body's cells for the rest of a person's life.

The incubation period is between 33-49 days. Symptoms include:
* high fever - above 39°C (102.2°F)
* sore throat (this can be severe and mistaken for tonsillitis)
* tiredness and lack of energy
* loss of appetiteweight loss
* swollen tender glands (in the neck and around the body)
* headachemuscle pains
* occasionally a fine red rash
* sometimes an enlarged, tender spleen

The diagnosis may be clear from the symptoms, but it can be confirmed by a blood test.

Because glandular fever is a viral infection, there's no specific treatment. Pain relief and fever treatments (including paracetamol or ibuprofen), fluids and rest are important to help overcome the infection. Antibiotics aren't needed and can trigger a rash in this condition.

A vaccine against the Epstein-Barr virus is under development. The infection is most contagious during the feverish stage, when contact with others should be avoided.

Recovery may take a week or two. In a small proportion of cases, the tiredness may be prolonged over several weeks, when it may be aggravated by exertion. (Rest is important in glandular fever and it's usually recommended that Those affected don't take part in strenuous sports for a month after the infection.)

Complications such as hepatitis or pneumonia are rare but need intensive medical support. For a few of those affected, the infection leads to chronic fatigue syndrome. If you're worried, talk to your doctor.