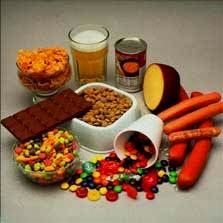 Food Additives, What Are They?

They are chemicals that are added to food to improve its shelf-life, appearance and flavour. Additives include ascorbic acid, which is used to prevent food from going off, emulsifiers to help mix oil and water together, and active packaging that improves the quality or safety of food.

What Are The Risks Of Food Additives?

One in 8-12000 babies is born without the ability to metabolise phenylalanine from any dietary source. Phenylalanine is a naturally occurring essential amino acid found in all protein (including mother's milk) and is one of the two amino acids in aspartame. All children in the UK are screened for phenylketonuria shortly after birth and any found with it have to follow a strict diet for the rest of their lives, controlling the amount of protein they consume.

Toxic levels of phenylalanine in the blood can result in mental retardation. Scientists are also investigating a possible link between aspartame and changes in brain function. People have reported dizziness, headaches, epileptic-like seizures, and menstrual problems after consuming aspartame. However, concerns about a link between aspartame and cancer seem unfounded after extensive recent research.

Other additives highlighted by The Center for Science in the Public Interest (CSPI), a US organisation that campaigns for food safety, include:

Monosodium Glutamate (MSG): linked to headaches, tightness in the chest, and a burning sensation in the forearms and back of the head.

Saccharin: linked to cancer is laboratory animals. Top What are the recommendations?

All additives in the UK and Europe are controlled by law, and can only be used following stringent tests and approval by an independent committee of scientists and medical experts.

However, some scientists have linked additives - particularly tartrazine or E102 - to hyperactivity in children, allergies, asthma, migraines and even cancer. Several studies have now been published which show additives such as colourings or sodium benzoate can adversely affect the behaviour of children aged between 3 and 9 years old, such as one in The Lancet in 2007.

The British Nutrition Foundation (BNF) believes more research is needed before any firm link is established between additives and allergic reactions. But it does not rule out the possibility. According to the CSPI many additives should be avoided for health grounds.