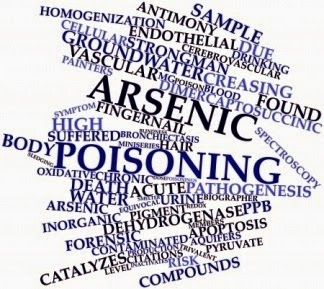 What Is Arsenic Poisoning?

Arsenic is known best as a deadly poison, although in small doses it does have medical benefits. BBC News Online looks at the workings of the chemical infamous for its deadly effects. Arsenic is a semi-metallic naturally-occurring chemical. It is all around us in the environment and we are all exposed to small doses on a regular basis. It is difficult to detect as it is generally odourless and flavourless, meaning people have little idea when it is around.

Arsenic can kill humans quickly if consumed in large amounts, although small, long-term exposure can lead to a much slower death or other illness. Studies have linked prolonged exposure to arsenic with cancer, diabetes, and thickening of the skin, liver disease and problems with the digestive system.

It has also been associated with nervous system disorders - feeling tingling or losing sensation in the limbs - and hearing difficulties. Small doses of arsenic have been shown to send some forms of cancer into remission, and it can also help thin blood. It can be present in many complementary medicines in toxic and sub-toxic levels. The homeopathic preparation contains no detectable arsenic

However, therapies involving the chemical are still in the experimental stages.

A person exposed to large amounts of arsenic - either through eating or drinking it - will usually die, and symptoms will appear within 30 minutes of exposure. Although the onset of symptoms may be delayed as the concentration is likely to be lower, there is a similar outlook for people who breathe large amounts of it.

Acute arsenic poisoning causes a metallic taste in the mouth, excessive saliva production and problems swallowing. The next stage is to suffer vomiting and diarrhoea coupled with garlic-like breath, stomach cramps and excessive sweating.

As the poison's effects progress, the patient will suffer seizures and go into shock, dying within a few hours. If death does not occur at this stage, it will happen a few days when the kidney fails.

Initial treatment of acute arsenic poisoning is to wash any affected skin with copious amounts of water and to remove any contaminated clothes. The patient may need a stomach wash out or irrigation of the bowel with polyethelene glycol to prevent absorption of the arsenic into the gut. Other supportive measures include oxygen, intravenous fluids, blood transfusions and cardiac medication if the heart starts to fail. Fits will also need treating. Pain killers are given when necessary and kidney function needs watching carefully by the attending medical staff. Any burns will need treatment and severe poisoning will probably require a treatment called ‘chelation therapy’ with DMPS, or DMSA.

Chronic poisoning is best treated by removing the source, such as contaminated drinking water and treating complications such as diabetes and heart complaints. Chelation therapy is of uncertain value here but giving micronutrients may be beneficial if sufferers are undernourished.

There is growing concern about levels of arsenic in the environment, both from natural occurrence and from pollution. Forty million people in West Bengal and Bangladesh are thought to be at risk from arsenic-contaminated water supplies, although studies are continuing into what effect the poisoning is having. The contamination is thought to have occurred naturally, as a result of arsenic being released from rocks into underground water supplies.

The US Environmental Protection Agency has an ongoing research programme to look into arsenic in the environment and to establish what constitutes a safe level.