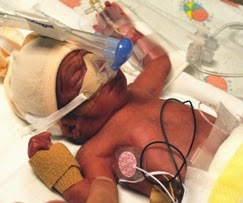 What is Brain Haemorrhage In Pre-Term Babies?

Babies born more than 8 weeks prematurely (at 32 weeks of pregnancy or earlier) face more than one threat to life in their early days. This is simply because not every part of their body has developed sufficiently to function properly outside the womb. One of these risks is that their poorly developed blood vessels will bleed into the brain. The brain requires an excellent blood supply, meaning that some parts have a large number of tiny blood vessels.

Small bleeds are commonplace in premature babies, occurring in 10-15 per cent of such babies - and doctors would expect the majority to resolve themselves. Up to 50 per cent of haemorrhages have no symptoms and most occur within 72 hours of birth.

The more premature the baby, the greater the risk of a significant haemorrhage into the brain (‘intraventricular’ IVH).

Water On The Brain

In addition, there is another potentially dangerous complication - hydrocephalus, or "water on the brain". This possibly happens because large clots resulting from the bleeding interfere with the normal movement of cerebrospinal fluid, which begins to gather in inside the cranium. Over time, this can place the brain under great pressure, and cause damage.

The only treatment for hydrocephalus is an operation performed by a neurosurgeon to relieve the pressure.

Small haemorrhages may have no symptoms, as previously stated, whereas a larger bleed can cause the baby to collapse suddenly. The baby may have a seizure or fit, or become limp and floppy or develop a paralysis of one or more limbs. The loss of blood into the brain tissue may cause anaemia or jaundice.

An ultrasound scan is used to make a formal diagnosis, and many premature babies are given this check inside their first week.

The most effective strategy for IVH is to prevent premature delivery, and reduce the risk of the bleed happening in the first place. The longer the baby can be safely kept in the womb, the less likely IVH is to occur - particularly at its most severe grades. Advances in neonatal intensive care technologies and techniques have reduced the risk of IVH in recent years, and there is some medication, which, if given to the baby, may slightly reduce the chances of a bleed. However, once a premature baby has been born, and an IVH detected, doctors can do little to directly tackle the problem, and must hope that the bleeding resolves itself.

Children who survive IVH, particularly severe cases or those which go on develop hydrocephalus, may suffer neurodevelopmental disability, such as cerebral palsy, as a result. Those who suffer the mildest form of the condition have been found to suffer no significant neurodevelopment disabilities - but those with the most severe grades are far more likely to be affected.

Great Ormond Street Hospital in London has a help line offering advice and comfort to parents who have lost a child.

The Stillbirth and Neonatal Death Society