Causes And Risk Factors For Acne

The skin has thousands of tiny hair follicles. Each has a sebaceous gland that produces an oily substance, sebum. An abnormal reaction of the sebaceous glands in the skin to the male hormone testosterone causes them to make more sebum. This characteristically occurs at puberty when production of hormones including testosterone increases in both boys and girls. Hormonal changes also cause the cells of the top layer of skin (the epidermis) to overgrow, forming a thicker layer which can block the outflow of sebum from the glands.

As a result of overproduction of sebum and obstruction of its flow, the sebaceous glands become enlarged forming a pimple or spot.

The opening of the sebaceous gland is filled with a plug of sebum mixed with sloughed-off skin cells. These cells undergo a chemical reaction forming a black colour - a ’blackhead’ (which is therefore skin pigment, not dirt). At this point careful squeezing can push out the blackhead or pigmented sebum plug and let the spot drain (and so settle down).

In some spots the opening of the gland is so tiny that air cannot reach the sebum, so these spots don’t become blackheads but stay as ’whiteheads’. These are more common and are likely to become red and inflamed, due to bacteria commonly found harmlessly on the skin surface which thrive on the sebum and multiply in the sebaceous gland, triggering an inflammatory reaction.

If the blocked hair follicle ruptures, inflammation can spread. This can lead to nodules and cysts forming, which leave scars as they disappear.

There's no scientific basis to the idea that diet or particular foods make acne worse (for example, chocolate, fatty or fried foods), but some people do identify specific foods they believe make their acne worse.

Common Triggers For Acne Include:

Acne affects young adults the most, but can also be a problem for older people. It usually starts in puberty, between ages 12 and 14, when increased levels of the male-type sex hormones androgens (girls have these as well as boys) stimulate the sebaceous glands to increase production of sebum.

More than 90 per cent of teenagers have acne.

Women are generally affected at a younger age, the peak severity being between ages 17 and 18, while men peak between 19 and 20 years old. Men tend to be worst affected, because they produce more testosterone.

The main symptoms are spots that range from tiny, painless whiteheads to large, angry red cysts filled with sebum and pus. Scarring may leave discoloured pitting of the skin.

Acne appears most frequently on the face, but can also appear on the neck, behind the ears, on the chest and in the groin. Usually it's a mild condition, but for 15 per cent of people it's severe.

Treatment Of Acne And Recovery

There are two goals for treatment - to reduce the number of inflamed spots in order to prevent skin scarring and psychological distress, and to prevent new spots from forming. To achieve this, treatments aim to: 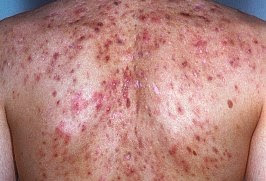 The treatments used depends on the severity of the acne.

Healthy skin needs a good intake of vitamins A, C and E, zinc and at least eight glasses of water a day (all of us should do this whether or not we have spots).

It’s possible to gently squeeze blackheads and whiteheads to unblock the sebaceous glands but you should take care making sure your hands are clean and that you don’t exert too much pressure (there’s a risk that you will aggravate infection and damage the skin leading to worse scarring). If you are very aggressive with squeezing you may push infection and inflammatory chemicals deeper into the skin, making cysts and permanent scars more likely.

If someone only has a few spots occasionally, a medicated lotion or face wash that removes excess grease and cleanses the skin is all that's needed. Gels, creams and lotions containing benzoyl peroxide are also helpful because the antibacterial and skin peeling actions help to reduce levels of bacteria and unblock skin pores.

Many complementary treatments that claim to treat acne work for some people but not others. Some of the more reliable ones are a facial gel mask of colloidal silicic acid (which should be used twice a day to remove excess grease and dead skin cells) and tea-tree oil gel, which has antiseptic and antibacterial effects.

Where spots are numerous and resistant to simple measures, and especially if the skin is very red and inflamed, antibiotic treatments may be more effective. These treatments may consist of a lotion which you apply to the spots, or a course of tablets. But you need to persist as it sometimes takes up to eight weeks for any noticeable improvement and the treatment is usually needed for at least six months.

While antibiotics can target the bacteria that cause spots to become red and inflamed, they do not affect the underlying process which causes spots to form in the first place.

Another effective treatment consists of chemical derivatives of vitamin A called retinoids. These chemicals, which are applied onto the skin surface not only reduce inflammation but also reduce the increase of cells, so helping to prevent new spots from forming as well as treating current spots.

Most treatments prescribed by doctors for acne consist of a combination of benzyl peroxide, antibiotics and retinoids, as well as other chemicals that may help such as zinc.

Some people with severe forms of scarring acne need more powerful medicines which should only be used under the guidance of hospital skin specialists and laser therapy to reduce the scars.