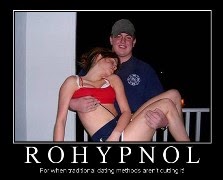 Rohypnol is the brand name of a medicine called flunitrazepam, and is one of the benzodiazepine class of sedative or tranquilizer drugs, of which ‘Valium’ or diazepam is perhaps the best known. Rohypnol or flunitrazepam is 10 times more potent than diazepam.

In the UK the drug is no longer used in the NHS but may be available on private prescription for those who need it (although it’s generally felt that there are better alternatives). Its legal status in the UK is a class C drug, which means that it’s illegal to possess flunitrazepam without a prescription. It’s not legally available in the US, but as it is still made in some countries and illegal trade continues.

Rohypnol rose to prominence as the date rape drug because it was colourless, odourless, tasteless and easily dissolved - ideal for spiking drinks undetected - and causes sedation or euphoria in approximately 20 to 30 minutes. Several cases report the drug being given to women without their consent in order to remove their inhibitions.

However, Roche, the company that originally manufactured the drug, revised the formula to make it slower to dissolve and added a dye that turned it blue when mixed in a drink, so making it easier to detect. However, counterfeit versions of the drug are now in circulation which don’t have these added features.

Why Is Rohypnol Used?

The drug has a number of legal and illegal uses. It’s still used as a medical treatment in some European countries and Latin America for the management of anxiety and sleep disorders, although the recommendations are usually that it’s only a short term measure.

It’s also used illicitly by ravers who take it because of its euphoric and relaxing effects. The effects last for about eight hours but it can take over 24 hours for its ‘hangover’ effect to disappear.

Users report mixing it with beer to enhance the feeling of drunkenness, and it has been reported to be used in combination with marijuana and cocaine, as well as heroin. It may also be used to ease the come down from a cocaine or crack binge.

However, it’s the drug's more sinister use in date rape cases that has led to its notoriety. The drug can interfere with memory and there has been concern that people given spiked drinks then have little memory of what happened afterwards. Although it has been implicated in several date rape cases in the US, there is no confirmed case of it being used in sexual assault in the UK and it’s not clear exactly how widespread it’s misuse is.

What Are The Risks From Rohypnol?

Like any medicine, flunitrazepam or Rohypnol can cause side effects even when used appropriately. These include drowsiness, confusion, slurred speech and weakness.

When combined with alcohol, Rohypnol is more likely to cause problems and can make users shed their inhibitions. They can also suffer from loss of memory. It has been labelled the date rapist's drug of choice although the extent of its misuse this way isn’t clear. Amnesia can set in within a short time of ingesting the drug, and the disinhibiting effects kick in soon after. Someone who has taken the drug unwittingly is unlikely to remember what happened while they were under the influence.

If there is concern that a person may have been unwittingly given flunitrazepam, a urine test can be carried out specifically for the drug, but this needs to be done within 72 hours of the assault to successfully detect traces of flunitrazepam.

There are reports that other drugs, such as gamma-hydroxybutryate (GHB) may be used to incapacitate victims in order to sexually abuse them, but alcohol remains the substance most frequently associated with substance-assisted sexual assault.

The best advice to avoid being spiked is to trust no one. If you are worried, never accept any opened drink, particularly not from a stranger. Tamper-proof bottles or cans are recommended. They shouldn’t be opened by someone else.

Rohypnol
By Health & Medical Reviews and News at Sunday, September 23, 2012