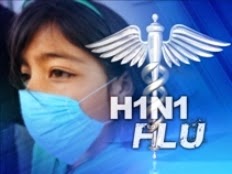 Influenza is caused by a virus. There are many types of flu virus and these are constantly changing, making it hard for the immune system to deal with. The influenza virus that causes swine flu is known as H1N1 2009, which is a type of influenza A (there are also influenza B and C viruses).

H1N1 viruses cause the regular yearly flu outbreaks in humans, but swine flu is caused by different strains of H1N1. The 2009 strain of swine flu - pandemic A (H1N1) 2009 – had not previously been found in pigs or humans, and contained a mixture of genetic material from human, pig and bird flu. In other words, it was a new variety of flu, which people didn’t have much immunity to.

Outbreaks of flu tend to follow certain patterns. Every year, the number of flu cases rise during winter - this is seasonal flu. If a lot of people are affected, it may be said to be an epidemic. About one per cent of those affected are likely to die, usually owing to complications such as a secondary bacterial infection of the lungs.

Every so often, there is a major change in the flu virus and it spreads rapidly around the world causing a high number of deaths. This is pandemic flu. One of the factors scientists look for is when a new flu strain emerges among animals and spreads to humans, changing again to develop the ability to spread from human to human. In the 2009 outbreak of swine flu, humans picked up the virus through contact with pigs, but it was soon being transmitted from human to human.

Influenza A H1N1 2009 first appeared in Mexico, followed by a growing number of cases around the world, including the UK. The World Health Organization declared a pandemic in June 2009. The number of cases rose during the summer, which is very unusual as it isn't 'flu season'. After schools returned in September 2009, the number of cases rose steadily until October, then began to fall. The pattern was similar in most countries.

By the end of February 2010, the pandemic had caused 15,921 deaths worldwide. However, by summer 2010 levels of the virus were falling and the WHO was able to declare the pandemic over.

However, influenza A H1N1 2009 has continued to circulate and cause disease at a lower level in many countries, and is expected to continue to do so for many years as part of the seasonal flu pattern. For this reason, the WHO has recommended that the strain be included in the flu vaccine for 2010-2011.

Who's At Risk Of Swine Flu?

Anyone can catch flu, but seasonal flu tends to cause more problems among the elderly, the very young and the chronically ill.

However, pandemic flu tends to affect previously healthy adults - this has been the case with swine flu, where many victims have been younger adults. In most cases, though, swine flu is a relatively mild respiratory illness.

Swine flu seems to be more contagious than seasonal flu, with up to twice as many contacts of those affected developing the disease. Those living in close proximity to someone with the infection are at greatest risk.

The symptoms of swine flu begin within two days of exposure, at which point the person is most infectious. The symptoms are very similar to those produced by seasonal flu, and include:
High fever (usually above 38ºC)CoughSore throatHeadacheAching musclesChills and shivers despite feverExhaustion or fatigueDiarrhoea or a stomach upset (a particular feature of pandemic A (H1N1) 2009)

It can be difficult to tell mild flu from a cold, but flu is usually more generalised, causing aching and fatigue all over, with a higher fever.

If complications such as pneumonia develop, there may be other symptoms such as difficulty breathing.

Symptoms are usually enough to suggest swine flu, but it can be confused with other viral illnesses. Laboratory tests are needed to confirm a diagnosis of flu and to identify which strain is responsible.

Laboratory tests using nose or throat swabs can give results within 15 minutes, but can only tell if influenza type A or B is present, rather than identifying the exact strain. More accurate tests can take a couple of days to give a definite result.

As swine flu has become more widespread, the Department of Health has advised doctors to stop testing and simply treat those with symptoms.

If you think you have swine flu, you should stay at home and avoid contact with others. You can call NHS Direct on 0845 4647 or your GP for advice.

Most people with flu just need to rest, drink plenty of clear fluids, take paracetamol or ibuprofen (don't give aspirin to children because of the risk of Reye's syndrome) to reduce their temperature or ease aches and pains, and use simple remedies such as cough syrups or vapour rubs.

However, vulnerable groups such as pregnant women, children under five, the over-65s and those with serious conditions such as heart disease, asthma, diabetes or immunosuppressive illnesses may need extra treatment, including anti-viral drugs such as Tamiflu (oseltamivir) or Relenza (zanamivir).

The treatments aren’t a cure, but can reduce the risk of infection for those who have been exposed to the virus, reduce the ability of a person with the virus to pass it on and shorten the course of the illness when someone has flu. Most importantly, these drugs reduce the risk of serious complications and death. For maximum effect, they should be given as early as possible. As with any medicines, there may be side effects from anti-viral drugs.

As with all infections, good hygiene is essential to reduce the risk of spread or contact with the virus:

• Wash your hands regularly.
• Cover your mouth and nose when you cough or sneeze.
• Use tissues and dispose of them carefully.
• Clean hard surfaces regularly with a standard cleaning fluid.
• Avoid close contact with people who have fever and a cough.

The effectiveness of wearing a face mask in preventing transmission of flu isn’t clear, but it may give some protection to those people, such as health professionals, who work closely with people with symptoms of flu.

Don’t worry about eating pork products - there is no evidence that swine flu can be picked up that way. Even if virus is present in the meat, thorough cooking will destroy it.

A swine flu vaccine was given a UK licence at the end of September 2009. At that time, priority groups were given the vaccine first. These included those with serious heart or respiratory disease, diabetes or a weakened immune systems due to cancer treatment, as well as frontline health and social care workers.

H1N1 2009 is now part of the seasonal flu vaccination and is being offered routinely for the first time to pregnant women, as they are disproportionately affected by the illness. For most other groups, swine flu isn’t as severe as originally feared.

Children aren’t being routinely immunised, as there seems to be a satisfactory level of acquired immunity from infection in 2009/10, and the vast majority of cases were only mild.

Certain manufacturers’ vaccines aren’t being offered to the vulnerable under-fives, owing to worries about a slightly higher risk of febrile convulsions.