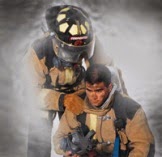 The 3 Major Problems Associated With Inhaling Smoke During A Fire Are:

• Heat damage to the tissues of the respiratory tract.
• Asphyxiation (when the body fails to get sufficient supplies of oxygen to the tissues. Inhaling smoke blocks the intake of oxygen in the lungs, and boosts levels of the gas carbon monoxide which interferes with the ability of the blood to carry oxygen).
• Inhalation of smoke particles and chemicals such as carbon monoxide and cyanide causing direct irritation of the lung tissues. Heat damage is usually limited to the tissues of the mouth and upper throat.

Fortunately, smoke cools rapidly once it is inhaled. Animal experiments have shown that if air at 142C is inhaled it has cooled down to 38C by the time it has reached the chest.

One of the main risks of being involved in a fire is smoke inhalation. Inhaling hot smoke can have a devastating effect on the delicate tissues of the respiratory system and their normal functioning.

About four per cent of burn victims die from their injuries - and in many of these cases the crucial factor is smoke inhalation.

The full extent of the damage may only become apparent days after the incident itself.

Heat damage can destroy the cells that line the mouth and throat. Often this leads to the build up of fluids within the lining of the airways (called oedema), which can obstruct the airways and make breathing painful and difficult.

There may also be intense coughing, wheezing, a sore throat and copious production of phlegm or mucus which may be stained with sooty particles.

Maximal airway oedema actually occurs 24 hours after inhaling smoke, so patients with smoke inhalation need close observation and may need respiratory support or even intubation (where a tube is passed down into the airways to assist with breathing).

Serious smoke inhalation can lead to damage to the smaller airways deeper down in the respiratory system. These airways may become blocked by damaged material. The minute hairs, or cilia, that line these airways and help to ferry contaminants out the respiratory system may also be damaged. In this case, the patient may find breathing more and more difficult, as asphyxia sets in.

They may become blue or cyanosed, especially around the lips and mucus membranes or noticeable on the fingertips (as oxygen levels in the blood drop), and start breathing faster to try to get more oxygen in.

As oxygen levels drop they may become confused and even lose consciousness. There is also a risk of developing pneumonia, or even complete respiratory failure. Alternatively their lips may appear unusually bright ‘cherry red’ which is the effect of carbon monoxide in the blood and which can disguise the cyanosis of low oxygen levels.

In addition to interfering with oxygen carriage by the blood, carbon monoxide is poisonous and causes headache, nausea and vomiting. Sometimes the person appears well, with no obvious symptoms, until the effects of carbon monoxide become apparent.

As well as direct tissue damage, smoke inhalation may provoke dangerous chemical reactions within the body. Pollutants contained in smoke can trigger the immune system to react, resulting in damage to the tissues. The immune system produces a cellular response and also chemicals called cytokines which seek out and helps neutralise inhaled contaminants.

Too much of a specific cytokine called tumour necrosis factor-alpha (TNF) can stimulate a chain reaction that leads to the death of cells and general irritation in the lung, called a pneumonitis, which further interferes with the process of taking oxygen in to the body.

So anyone who has been involved in a fire and may have inhaled smoke should be carefully checked and monitored for sometime afterwards. They may need intensive medical treatment.