DVT And The Risk Of Pulmonary Embolism - Health And Medical Information

DVT And The Risk Of Pulmonary Embolism 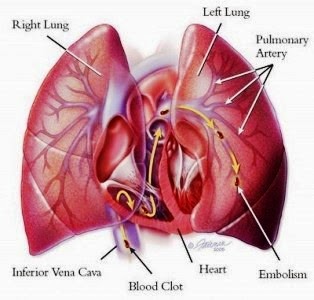 When you have a deep-vein thrombosis (DVT), you need to treat it to avoid a life-threatening complication: a pulmonary embolism.

A pulmonary embolism (PE) usually happens when a blood clot in the leg breaks away, travels to the lungs, and blocks a lung artery. It can damage the lung and other organs and lead to low oxygen levels in the blood. It can even be fatal.

A pulmonary embolism doesn't always have symptoms. If there are symptoms, they include:
* Chest pain, which may get worse with a deep breath
* Sudden shortness of breath and rapid breathing
* Fast heartbeat
* Sudden cough
* Coughing up blood
* Lightheadedness or fainting
* Anxiety

If you think you have a pulmonary embolism, call 911.

A heart attack, pneumonia, and other things have similar symptoms to a pulmonary embolism. To find out if you have a PE, doctors may give you different types of X-rays and lung tests.

If you have a life-threatening PE, doctors will give you a drug called a thrombolytic to dissolve the clot. These drugs can save your life, but they have a serious side effect: bleeding that is hard to stop.  Doctors will carefully watch you for that.

If you have a PE, your doctor will also give you a blood thinner.

Blood thinners doesn't break up the clot. They prevent it from getting bigger and stop more clots from forming.

After You've Had a Pulmonary Embolism

If you've had a pulmonary embolism, you and your doctor should figure out why it happened.

Your doctor should check on what may have led to the DVT, such as:
* A clotting disorder
* Major surgery
* An injury
* Obesity
* High estrogen levels (from pregnancy, birth control pills, or hormone replacement)
* Heart disease
* Lung disease
* Inflammatory bowel disease (IBD)
* Sitting or lying still for a long time
* Smoking
* Cancer

Respiratory
By Health & Medical Reviews and News at Wednesday, December 18, 2013