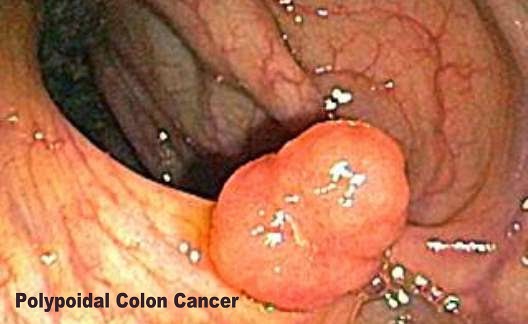 What Is Colorectal Cancer?

This is the cancer caused by cells in the large intestine (colon) and back passage (rectum) multiplying both at a faster rate and in an irregular manner than normal. Each year in the UK around 40,000 people are diagnosed as having colorectal cancer - fortunately it can be treated if it is diagnosed early enough.

It is now known that bowel cancer starts to develop as the result of mutations in the cells lining small polyps that sit on the inner surface of the bowel. Many of these remain completely harmless but it appears increasingly likely that some people are born with a genetic predisposition for these polyps to become abnormal. This 'inbuilt' abnormality appears to run through some families, and the greater the incidence of the accumulated genetic abnormalities the greater the likelihood of bowel cancer developing.

It is probable that for many people in the Western world it is a combination of genetic predisposition and poor diet that contribute to whether bowel cancer develops or not. Other contributing factors include long-standing inflammatory diseases of the bowel such as ulcerative colitis or Crohn's disease.

What Are The Signs And Symptoms Of Colorectal Cancer?

Early on, colorectal cancer may have few symptoms. There may be bleeding noticed when passing motions, and this blood may be mixed with the stool or noticed on the toilet paper or in the pan itself. There may also be a change in the normal bowel habit so that motions may be looser than usual - occasionally with mucus - or there may be a tendency to constipation. If a tumour begins to block the bowel there can be abdominal pain, wind and bloating. Weight loss usually occurs later in the disease and if the disease is advanced there may be perforation of the bowel wall itself - this is a medical emergency and requires surgical treatment.

Most people who are eventually diagnosed with bowel cancer have one of the following symptom combinations:

• A persistent change in bowel habit causing them to go to the toilet more often and pass looser stools, usually together with blood on or in their stools
• A persistent change in bowel habit without blood in their stools, but with abdominal pain
• Blood in the stools without other haemorrhoid symptoms such as soreness, discomfort, pain, itching or a lump hanging down outside the back passage
• Abdominal pain, discomfort or bloating always provoked by eating, sometimes resulting in a reduction in the amount of food eaten and weight loss

• Your doctor will examine your abdomen and do a rectal examination (a PR) with a finger to feel for any cancers low in the back passage.
• Blood tests will show any anaemia due to bleeding from the bowel.
• A colonoscopy where a flexible fibreoptic telescope is inserted into the bowel, under some sedation, and a direct view can be obtained of any abnormalities or polyps. Samples, or biopsies, can also be taken at this time for later analysis under a microscope and polyps can be 'snared' and removed using a special cutting wire at the same time.
• Some centers still carry out a special xray called barium enema where barium and air are introduced before a series of normal X-rays are taken.

If a cancer is present, a scan may occasionally be organised to assess whether this has spread outside the bowel. 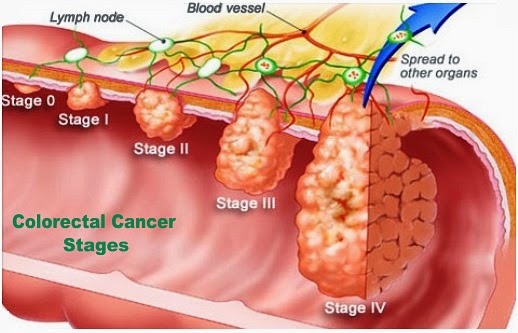 If a cancer is confined within a polyp, removal of that polyp is considered curative. If however the cancer cells have not been removed completely or there is spread outside the polyp, an operation may be required. The operation type depends on where the cancer is and how extensive it has become but it is often possible to simply cut out the cancer and join the ends of the bowel back together again. If this is not possible, an opening (or 'stoma') needs to be made onto the skin of the abdomen where a changeable bag collects the stool. This is called a colostomy or iliostomy (depending on which part of the bowel is used to make it) and the majority of these are temporary, being reversed after the initial surgery has been recovered from.

If there is a risk that cancer cells have spread into the rest of the body, chemotherapy or radiotherapy are possible follow-up treatments and these will be arranged and discussed with you by a cancer specialist called an oncologist.

There may also be regular follow-up checks by your surgeon for some years after surgery or the removal of a polyp to check there has been no recurrence of any cancer.

This depends on the stage of the cancer, whether it has spread to the rest of the body, and how well it responds to treatment. Each person with bowel cancer has a unique presentation and treatment needs, and your specialist will be able to advise exactly what percentage benefits you are likely to obtain with the treatment you are receiving.

A diet that is rich in fresh vegetables, fruit and fibre appears to be protective against bowel cancer, as does regular exercise. A diet very heavy in red meat however may slightly increase the risk, as does a strong family history of bowel cancer. Colonoscopy or blood tests may be advised to other immediate family members if there appears to be a risk of a genetic inherited abnormality - your doctor will be able to advise you on this.

1. Have you noticed your bowels not working as normally as usual?
2. Have you lost any weight?
3. Have you passed any blood in your motions?
4. Does anyone in your family have bowel problems?
5. Do you have any abdominal discomfort?

1. Will I need a stoma?
2. Does my family need screening?
3. How often will I need repeat colonoscopies?
4. Can I eat and drink normally with a stoma?
5. What are the side effects of chemotherapy or radiotherapy?

Gastrointestinal
By Health & Medical Reviews and News at Monday, March 30, 2015