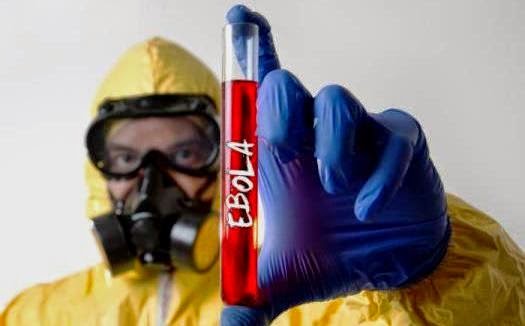 After receiving an experimental emergency vaccine, a doctor from the US who had received a needle stick injury, and so put at high risk of infection while working in an Ebola treatment unit in Sierra Leone, has been found clear of the virus.

The physician, given the vaccine 43 hours after the needle stick injury, went on to show a clinical syndrome "consistent with vaccination response, and no evidence of Ebola virus infection was detected."

Known as VSVΔG-ZEBOV, the treatment was injected into the doctor-patient's muscle as he was boarded onto a flight back to the US.
During transit 12 hours after the injection, malaise, nausea and fever set in. Care following at the special clinical studies unit of the National Institutes of Health in Bethesda, MD, observed this sequence:

The 44-year-old American doctor had received his injury when placing a needle into a sharps bin - it "inadvertently punctured two layers of gloves and caused bleeding of the left thumb."

The needle "had just been in direct contact with severely ill Ebola patients" and the exposure was estimated to pose a significant risk of infection for the doctor.

"The patient experienced a transient febrile syndrome after vaccination," says Thomas Geisbert, PhD, in his editorial article about the case. He reiterates the researchers' findings:

"Most significantly," Dr. Geisbert adds, the vaccine gave an immune response in the patient at a level that had been shown in tests on primates to confer protection against the virus.

Laboratory tests on the doctor showed the vaccine expressed the surface glycoprotein of the Ebola virus, which was able to induce a "sufficient level" of a certain type of antibody response to the glycoprotein.

Success in animals should be advanced to humans 'urgently'

"Although it is not possible to know with absolute certainty" whether the vaccine used to treat this single case of "potential high-risk exposure" had any influence on the patient's survival, Dr. Geisbert says, "this incident serves as an example of how important it is to have safe and effective countermeasures available in sufficient quantities that can be rapidly deployed for emergency use for both medical workers and affected populations."

A number of vaccines and postexposure treatments have made "substantial progress" in animal studies, but advancement of these for human use "is a matter of utmost urgency," Dr. Geisbert adds - none is yet licensed for use in people.

This is just the second time a person has been given VSVΔG-ZEBOV for postexposure treatment; its first use in a human was in 2009 for an Ebola lab worker.

The authors of the present case study - Dr. Mark Mulligan of Emory University in Atlanta, GA, and colleagues - note, however, that four early-phase clinical trials were started in 2014 - although the results are as-yet secret.

The authors also cite a trial that has just begun in Liberia, with enough promise from this confidential information to investigate the vaccine for use in pre-exposure prevention of Ebola - aiming, that is, to protect people who have not been infected with the virus but are at risk.

The authors say there are unknowns in the physician's case that will need to be considered for future experimental treatment.

"In the current patient, a self-limited, moderate to severe clinical syndrome began at 12 hours postvaccination."

At the end of January, the World Health Organization said the Ebola fight 'had shifted to ending the epidemic' in the West African countries affected.