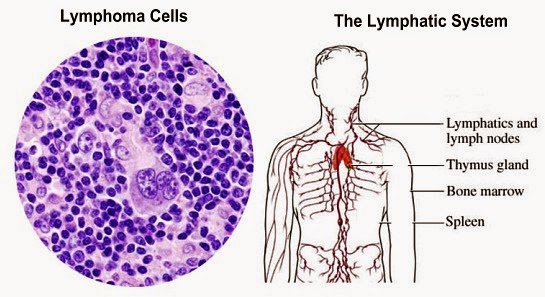 Lymphoma is cancer of the lymphatic system. A cancer that originates in the white blood cells called lymphocytes in the network of lymph glands and channels that occurs throughout the body. This lymphatic system network collects lymph fluid that bathes all the body cells. The lymphatic system is also a very important part of the immune system which keeps the body free of infection.

There are two main types of lymphoma: Hodgkin's Lymphoma and Non-Hodgkin's lymphoma (NHL).

Reed Sternberg cells are a type of white blood cells called a B lymphocytes, that has become cancerous. B lymphocytes normally make antibodies to help fight infections. 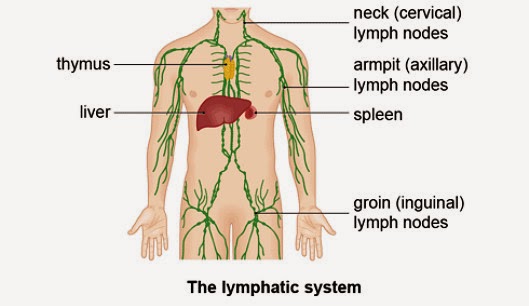 Lymphatic organs (spleen, thymus and liver), including lymph nodes, are part of the immune defense system of the body. As part of their role in fighting infection lymphocytes sometimes need to multiply rapidly and produce large numbers of copies of themselves. Normally, this process is very carefully controlled, and the extra cells self-destruct as soon as they are no longer needed. If the controls over this process go wrong then a lymphoma may result. As with leukaemia, it is rarely possible to establish why a particular person has developed lymphoma, but certain risk factors are known.

Some virus infections (such as the Epstein Barr virus that causes glandular fever or infectious mononucleosis) appear to predispose towards certain types of lymphoma. It is important to emphasize that these viruses are mostly common viruses which may but rarely cause a lymphoma to develop. No amount of contact with a lymphoma patient will increase one's risk of developing lymphoma or any other form of cancer.

The risk of developing a non-Hodgkin's lymphoma is considerably increased in people infected with the HIV (AIDS) virus - these patients account for only a very small minority of all cases of lymphoma. As for HIV infection this can explain only a very small proportion of cases.

People who have suppressed immune systems such as patients who have been treated for cancer and patients taking anti-rejection drugs after transplant are at increased risk of developing certain types of lymphoma.

Some occupations appear to lead to an increased probability of developing lymphoma, the agricultural industry is one example. It is not clear why this is so. There is a striking increase in the incidence of non-Hodgkin's lymphoma in all countries for which unreliable data are available. There are numerous studies into the possible cause(s) of this increase.

Most patients become aware of a problem only when they notice a painless enlargement of one or more of their lymph nodes. The commonest places for this to occur are the neck, groin or armpit although any part of the body where glands are situated may be affected. There may also be weight loss, shortness of breath, a raised temperature and quite marked night sweats. Occasionally there can be a widespread itch all over the body but with no obvious rash. One of the problems with lymphoma is that some - if not all - of its symptoms can occur with harmless minor illnesses, and so not require any further action. However, your doctor will be able to confirm this and you should get checked if you are concerned about your symptoms.

Definitely. This will involve referral to a hospital specialist, who will initially take a small sample of an enlarged lymph node, a biopsy. They will have this analyzed under a microscope. Blood tests and a chest X-ray are also usually done at this early stage to assess the general state of health of the patient. Once the diagnosis of lymphoma (Hodgkin's disease or non-Hodgkin's lymphoma) is confirmed, further tests are then done to assess the specific type of lymphoma. Tests will also be done to determine the extent of spread of the disease. This is called staging, the importance of which is that treatment is, in part, determined by the staging level.

These stages vary from stage 1 - one group of nodes, on one side of the body and one side of the diaphragm - to stage 4 where other organs are involved such as the liver, lungs or bones. 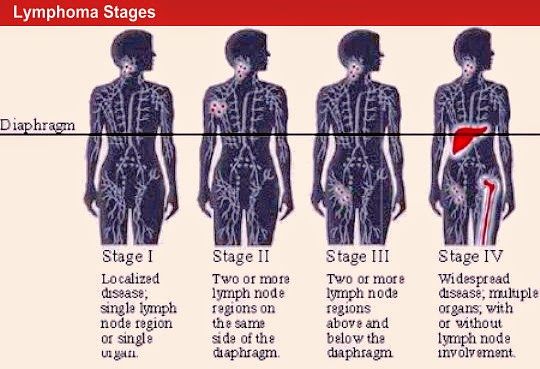 Stage III: Disease in lymph node regions on both sides of the diaphragm are affected.

Stage IV: Disease is wide spread, including multiple involvement at one or more extranodal (beyond the lymph node) sites, such as the bone marrow (which is involved commonly), liver, pleura (thin lining of the lungs).

• Bone marrow samples. A routine procedure where blood cells are taken from the bone marrow (usually the hip) under local anaesthetic and then examined under a microscope for lymphoma cells.
• Ultrasound scans of the liver and other organs.
• CT (computerised tomography) scanning, which gives a very detailed view of any enlarged nodes deep inside the body.

This depends on the staging, and usually involves radiotherapy and/or chemotherapy. Each pattern of treatment is individual to each patient with lymphoma. Chemotherapy is the use of one or more anti-cancer drugs, usually given intravenously but which may also be given as tablets.

A combination of three or more drugs is usual, given at intervals over a number of months. This timetable is supervised in hospital clinics, or occasionally as an in-patient and the interval between treatments varies from 1 to 4 weeks.

Radiotherapy uses high-strength radiation which aims to destroy any cancer cells while preserving healthy cells around them. This works best when only a few nodes are affected, and is given every weekday for between 2 and 6 weeks in an out-patient department. Before this is given, special assessment of the area to be treated is undertaken in an X-ray machine called a simulator, which allows for very accurate treatment by the radiation.

Side effects are common with both types of such treatments, but these are usually only present during active treatment and stop when the treatment stops. Common examples include redness, sickness and nausea, hair loss, mouth ulcers and diarrhoea. Some patients have virtually no problems whereas others will need treatment from their doctor to help with their side effects.

This depends on the type of lymphoma and the stage of the disease. Patients with low-level Hodgkin's have an excellent prognosis - 95% remain free of any disease after 5 years. Even patients with advanced disease have a good (60%) chance of remaining disease-free after 5 years, with 70% of them entering remission after treatment.

Non-Hodgkin's lymphoma is a more varied disease. Some patients have a very slowly progressing (indolent) form of the disease. This is more difficult to cure outright but many patients can enjoy years of good quality life with this form of the disease. Aggressive lymphoma is rapidly fatal if not effectively treated. This form of the disease has a better possibility of being curable in younger patients. Older patients, depending on their general health, may not be able to receive intensive, possibly curative therapy. Even this group of patients can enjoy considerable benefits, including extended survival, from standard therapy. A number of novel approaches to therapy involve enlisting the bodies own immune defenses, either by use of monoclonal antibodies or by vaccines to arouse an immune response to the lymphoma.

It is important to remember that lymphoma is treatable and to continue to enjoy life. A healthy diet, rich in fresh fruit and vegetables, allied to a positive outlook is very important in aiding good health at this time.

1. Have you felt any unusual lumps anywhere on your body?
2. Have you been having any night sweats?
3. Is your weight steady?
4. Do you itch?
5. Are you more tired than usual?

1. Can I pass lymphoma to my children?
2. Can I return to work after treatment?
3. How often should I have a check-up at my own doctors?
4. How quickly will I begin to feel better after treatment?
5. Will any alternative treatments help?