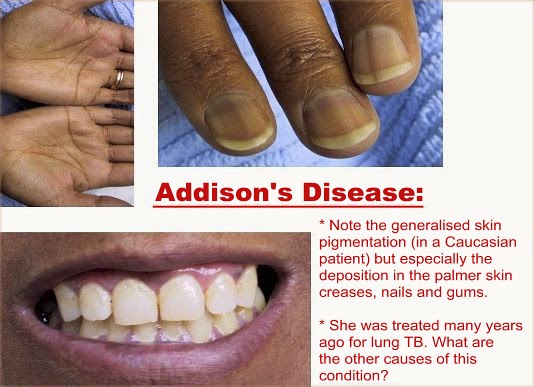 What Is Addison's Disease?

Addison's disease is usually caused by destruction of the hormone-producing area of the adrenal gland. The majority of cases are due to damage caused by the body's own immune system against itself (sometimes called autoimmune adrenal failure) and it is usually not clear why this occurs. Other possible causes include the existence of other diseases such as TB and amyloidosis. If the pituitary gland is at fault, this can be due to pituitary tumours, surgery to the pituitary gland or a general underfunctioning of the pituitary.

What Are The Signs And Symptoms Of Addison's Disease?

Most cases of Addison's disease develop very slowly, with sufferers often being slow to realise changes are occurring.

The Main Symptoms Of Addison's Disease Are;

• Profound weakness and fatigue
• Nausea and vomiting
• Weight loss and a loss of appetite
• Altered bowel habit - diarrhoea or constipation
• Skin darkening, especially of pressure areas or anywhere exposed to light such as the face. There may also be patches of pale skin that develop at the same time.
• Dizziness
• Period problems
• Thinning hair
• Cramps and pains in muscles
• Craving for salt or for salty foods and drinks
• Menstrual periods in women may become irregular or stop.

The symptoms can be vague at first. For example, you may feel tired and not right, but it is difficult to say why. Also, most of the symptoms can be caused by other problems, and Addison's disease is rare. So, the condition may not be recognised for weeks or months after symptoms first begin. 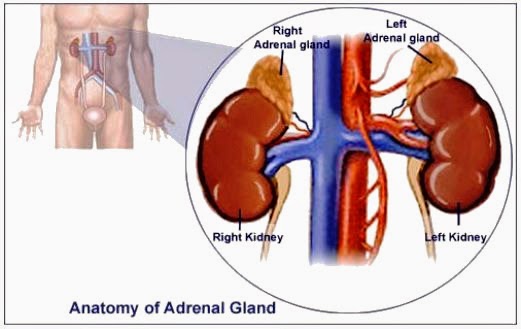 Sudden, Acute Symptoms Develop In Some Cases - This Is Called Adrenal Or Addisonian Crisis

If the level of cortisol falls to become very low you can become very ill in a short time. This is called an Addisonian crisis. In this situation symptoms include:

You may become severely ill and may die if the cause of the symptoms is not diagnosed and treated quickly.

An Addisonian crisis may suddenly develop after a period of less severe symptoms (described above). The crisis is often triggered by another illness such as an infection or a stress such as a surgical operation. During these times your body needs extra cortisol. But, if you have Addison's disease you cannot make extra cortisol, and you may then quickly develop these crisis symptoms. In some cases an Addisonian crisis develops when there have not been any previous symptoms.

The diagnosis is made by specialised blood tests that confirm the lack of the adrenal hormones in the circulation. X-rays of the chest and abdomen are also sometimes taken but for most patients blood tests are the main investigation.

For most cases of Addison's disease this is very simple and takes the form of hormone replacements such as hydrocortisone and fludrocortisone tablets as life-long treatment. If there are problems with the pituitary gland such as a tumour, surgery is needed to remove this. Follow-up is usually with blood tests every six months.

If correctly treated, the life span of someone with simple Addison's disease is normal and a full and active life is both the aim of treatment and the usual outcome.

It is important to take the hormone replacement as prescribed and to wear a 'medic alert' bracelet so that other people know you take steroids in case of an emergency. It is also advised to carry a steroid card with you and to remember to double the dose of treatment in the case of dental work or infections. Your GP will advise you as to the correct dosage in these cases.

1. Are my children more at risk of developing Addison's disease?
2. Will I need any kind of brain scan?
3. Will these types of steroid replacements have long-term side effects?
4. Am I allowed to give blood?
5. Will it affect my fertility?

Endocrinology
By Health & Medical Reviews and News at Friday, May 01, 2015