Alcohol (its scientific name is ethyl alcohol or ethanol) is produced by a natural process when yeasts ferment sugars. Sugars are found in many plants and, since the earliest time, man has used this process to produce alcoholic drinks from fruits and vegetables.

Alcohol is present in small quantities in many foods, especially sugary fruits which are beginning to ferment. In such small quantities, the effect of alcohol is unlikely to be noticeable and it simply contributes to our food intake. One gram of alcohol contains 7 kilocalories of energy (one teaspoon of alcohol = 4 grams of alcohol). Excess intake is an important cause of obesity - especially in men.

Most beers contain 3.5 to 5 percent alcohol.

Spirits like gin and whisky are around 50 percent alcohol.

When fruits rich in sugar like grapes, apples and pears are fermented with specially bred yeasts, the alcohol content can rise up to 12 or 13 percent by volume. Extra sugar can be added when the fruit does not contain enough. 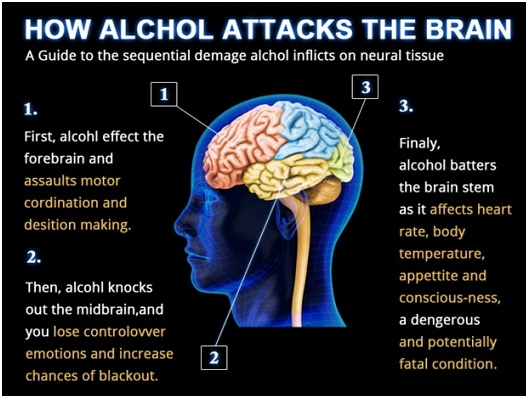 What Are The Effects Of Alcohol?

Alcohol is unlike many other foods in that it is absorbed directly from the stomach. Other foods need to be digested first. Because of this alcohol has its most pronounced effect when it is drunk on an empty stomach. After being absorbed it is taken into the body’s cells and broken down to produce energy. Excess unused alcohol spills over into the breath and urine where it can be measured to provide a very exact measure of the amount in the blood.

The body can break down around 6 to 10 grams of alcohol an hour so it will take an average person 5 to 8 hours to rid the body of the alcohol in half a bottle of wine or 1 and a half pints of beer. In the meantime, alcohol has pronounced effects upon many organs in the body, most obviously on the brain.

What Are The Signs And Symptoms Of Alcohol's Effect On The Brain, Intoxication?

It comes as a surprise for most people to learn that alcohol has a depressant effect upon the brain. Its first effect is upon the parts of the brain that normally restrain our behaviour and which stop us being silly and behaving in an antisocial and embarrassing way. If these parts of the brain are depressed, then this type of behaviour becomes apparent.

Later other parts of brain function are suppressed; we become less well co-ordinated with a tendency to fall; our speech becomes slurred and incoherent; we become drowsy and go to sleep.

With very high levels of alcohol in the bloodstream, the breathing centre can become inhibited. We stop breathing and die.

Taken over a longer period of time, alcohol can have a longer-term effect upon the brain causing depression and dementia.

Women who are thinking of becoming pregnant or who are actually pregnant are best advised to avoid alcohol completely so as to avoid any possible effect upon the developing baby.

How Much Alcohol Can I Drink Safely?

The current weekly recommendation for alcohol consumption in the UK is 14-21 units a week for women and 21-28 units for men. Drinking within these levels is associated a small decrease in risk of death from heart problems. Above this level of alcohol intake, the risks of death increase.

Wines vary considerably in strength. Wine of 1 unit per glass will contain 8 -11% alcohol, whereas the stronger wines will be around 15% alcohol.

What Levels Of Alcohol In The Blood Are Harmful?

At 20 mg/100 ml light and moderate drinkers begin to feel some effects. This is the approximate level reached after 1 unit.

At 60 mg/100 ml judgement is somewhat impaired: people are less able to make rational decisions about their capabilities (eg ability to drive).

At 80 mg/100 ml there is definite impairment of muscle co-ordination and driving skills.

At 100 mg/100 ml there is clear deterioration of reaction time and control.

At 120 mg/100 ml vomiting occurs, unless this level is reached slowly or the person has developed a tolerance to alcohol.

At 150 mg/100 ml balance and movement are impaired. The equivalent of one half pint of whisky is circulating in the bloodstream.

At 400 mg/100 ml most people lose consciousness. Some people die.

At 450 mg/100 ml breathing stops. This is the fatal level for most people and equivalent to one and a half pints of whisky in the bloodstream. 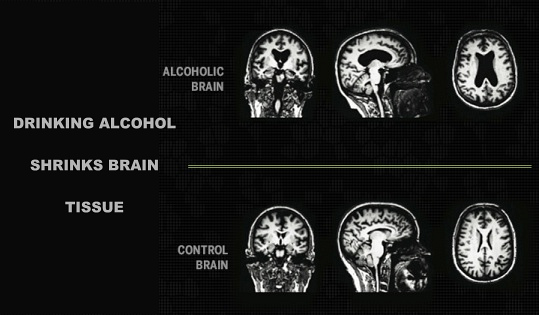 What Happens If I Drink More Than The Recommended Amount?

Alcohol is a depressant drug. Some people take alcohol to achieve this effect because they are anxious or depressed and wish to be relieved of these feelings. Unfortunately, alcohol is also addictive. Higher levels of alcohol intake may also lead to depression itself.

Alcohol has an effect upon many cells in the body, most importantly in the liver where the cells first enlarge in an attempt to remove the alcohol from the body; then become fatty; and finally develop a tough, leathery outer coat to protect themselves from the alcohol (cirrhosis). The liver first enlarges as it becomes fatty then shrinks. At this stage it can no longer perform its vital functions and the person develops liver failure, becoming jaundiced and swollen with fluid.

Alcoholics often neglect their diet and associated vitamin deficiencies can occur. Veins around the bottom of the gullet and in the anus dilate (varices) in an attempt to shunt blood around the liver. At times these can bleed, leading to life threatening emergencies.

Alcohol and vitamin deficiency also have an effect upon the brain itself producing various forms of dementia including delerium tremens, an acute psychotic illness with shaking, restlessness, confusion and delusions.

What Treatment Might I Need For Alcoholism (Alcohol Addiction)?

Alcoholism is a problem with both a physical and a psychological component and people suffering from alcoholism need treatment for both components.

Blood tests and liver biopsy are used to determine the level of physical problem.

Psychological addiction to alcohol is impossible to address unless the patient wants to change and once started the process is likely to be life-long since relapse is common.

Family therapy may be necessary since alcoholism affects more than just the addict.

Hospital treatment is often necessary in the early stage. Intravenous vitamins may be needed. In the longer term group work, counselling and psychotherapy are important and support groups like Alcoholics Anonymous are invaluable. Ex-alcoholics should practice total abstinence since even a small drink can rapidly lead to full-blown relapse.

Alcoholism is characterised by:

If you think you are drinking more alcohol than is good for you then: 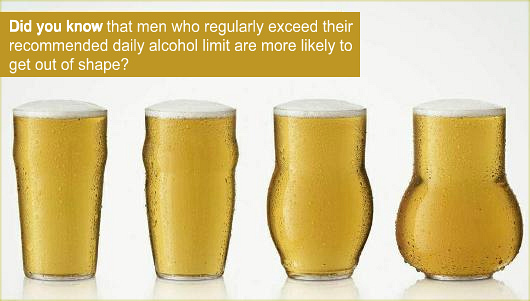 Intoxication
By Health & Medical Reviews and News at Saturday, June 27, 2015