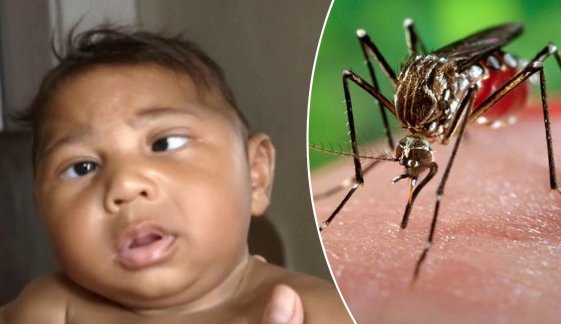 Zika virus is spread to people through the bite of an infected female Aedes mosquito. The most common symptoms of Zika virus disease are fever, rash, joint pain, and conjunctivitis (red eyes). The illness is usually mild with symptoms lasting from several days to a week. Severe disease requiring hospitalization is uncommon.

Outbreaks of Zika have occurred in areas of Africa, Southeast Asia, the Pacific Islands, and the Americas. Because the Aedes species mosquitoes that spread Zika virus are found throughout the world, it is likely that outbreaks will spread to new countries. In December 2015, Puerto Rico reported its first confirmed Zika virus case. Locally transmitted Zika has not been reported elsewhere but cases of Zika have been reported in returning travellers in the USA and UK.

Click here for a full schematic guide of how Zika Spreads »

There is no vaccine to prevent or medicine to treat Zika. Travellers can protect themselves from this disease by taking steps to prevent mosquito bites. When travelling to countries where Zika virus (see map below) or other viruses spread by mosquitoes have been reported, use insect repellent, wear long sleeves and pants, and stay in places with air conditioning or that use window and door screens.

Zika disease is linked to microcephaly in newborns of infected mothers. The current U.S. Centers for Disease Control and Prevention (CDC) issued travel guidance on affected countries, including the use of enhanced precautions and considering postponing travel, and guidelines for pregnant women. Ireland issued a similar travel warning, while other governments, such as Colombia, Ecuador, El Salvador, and Jamaica, advised women to postpone getting pregnant until more was known about the risks. 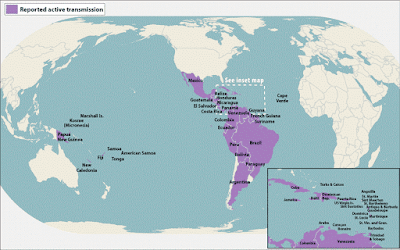 • About 1 in 5 people infected with Zika virus become ill (i.e., develop Zika).
• The most common symptoms of Zika are fever, rash, joint pain, or conjunctivitis (red eyes). Other common symptoms include muscle pain and headache.
• The illness is usually mild with symptoms lasting for several days to a week.
• Severe disease requiring hospitalization is uncommon.
• Deaths are rare. 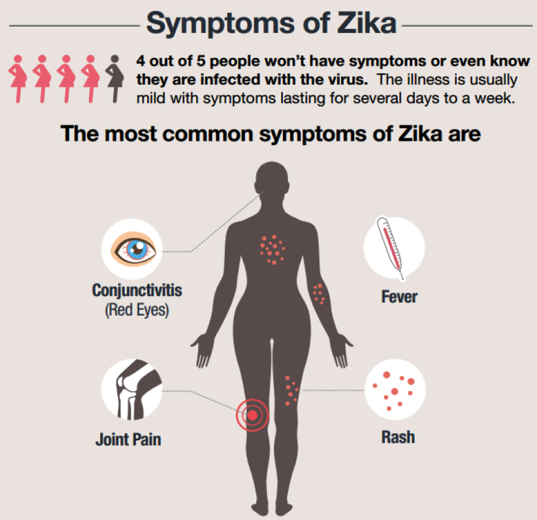 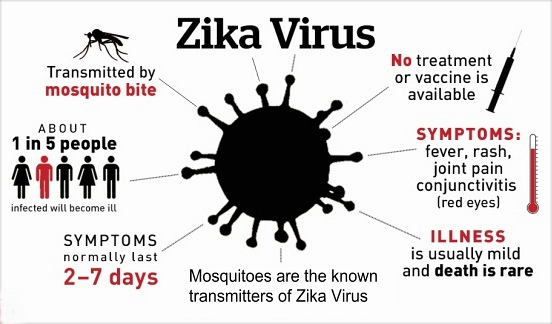 • No vaccine or medications are available to prevent or treat Zika infections.
• Treat the symptoms
• Get plenty of rest
• Drink fluids to prevent dehydration
• Take medicines, such as acetaminophen or paracetamol, to relieve fever and pain
• Aspirin and other non-steroidal anti-inflammatory drugs (NSAIDs), like ibuprofen and naproxen, should be avoided until dengue can be ruled out to reduce the risk of haemorrhage. If you are taking medicine for another medical condition, talk to your healthcare provider before taking additional medication. 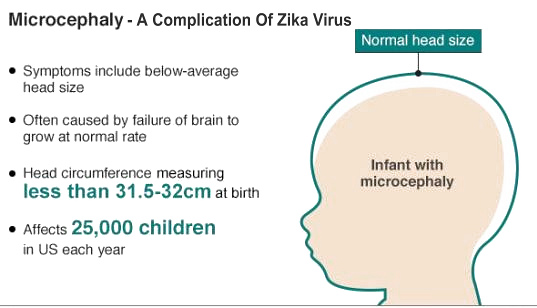