The Approach To Tremor - Health And Medical Information

The Approach To Tremor


The purpose of this video is to teach an overview and approach to a patient with tremor.

Tremor is an unintentional, rhythmic muscle movement involving to-and-fro movements (oscillations) of one or more parts of the body. It is the most common of all involuntary movements and can affect the hands, arms, head, face, voice, trunk, and legs. Most tremors occur in the hands. In some people, tremor is a symptom of a neurological disorder or appears as a side effect of certain drugs.

The most common form of tremor, however, occurs in otherwise largely healthy people. Although tremor is not life-threatening, it can be embarrassing to some people and make it harder to perform daily tasks.

Tremor is generally caused by problems in parts of the brain that control muscles throughout the body or in particular areas, such as the hands. Neurological disorders or conditions that can produce tremor include multiple sclerosis, stroke, traumatic brain injury, and neurodegenerative diseases that damage or destroy parts of the brainstem or the cerebellum. 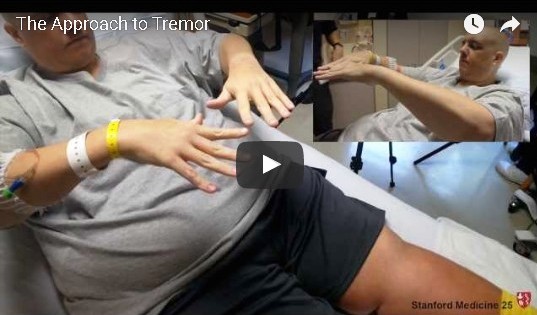 Other causes include the use of some drugs (such as amphetamines, corticosteroids, and drugs used for certain psychiatric disorders), alcohol abuse or withdrawal, mercury poisoning, overactive thyroid, or liver failure. Some forms of tremor are inherited and run in families, while others have no known cause.