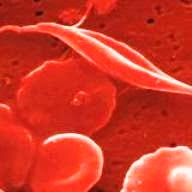 This is an inherited blood disease, mainly affecting Afro-Caribbean's and black Americans/Africans but is not an exclusively 'black' disease - it simply affects a disproportionately higher number of people than a Caucasian population. It affects the haemoglobin in the blood, which is the oxygen-carrying part, and is one of the commonest inherited blood diseases.

The abnormality means that the distorted or 'sickled' red blood cells are much more fragile than normal red cells and so are more likely to burst or rupture. This causes the symptoms, and also can cause anaemia - known as sickle cell anaemia. People with sickle cell disease who are especially prone to problems include pregnant women, dehydrated people or those undergoing an anaesthetic, or if body injuries occur.

This is a genetic condition, passed on by parents to their children. For it to occur, a sickle cell gene must be inherited from both the father and mother, so that an affected child has two sickle genes. If just one is present, this is known as a sickle cell trait rather than sickle cell disease, and sickle cell trait does not cause sickle anaemia. If two parents with sickle trait have a child, this child has a one in four chance of having sickle cell anaemia. Sickle cell trait has a greatly lowered incidence of symptoms, with a normal life expectancy.

These are due to problems of the circulation, caused by the abnormal 'sickle' shaped red blood cells blocking the normal flow of blood through the body, and so reducing the oxygen supply to organs. Such an episode is known as a sickle 'crisis', and causes varying symptom severity depending on the organ involved and the degree of sickling. Such symptoms include;

¤ Fatigue and other symptoms of anaemia.
¤ Severe pain.
¤ Swelling of the joints.
¤ Leg ulcers.
¤ Repeated bacterial infections, with lung and heart involvement.
¤ Eye and visual disturbances.

The treatment of these symptoms and of sickle cell disease in general is aimed at whatever individual features are present, and so is a highly individual treatment, with no single treatment available to reverse any long-term damage from repeat crises.

The way of diagnosing the disease is to take a simple blood test and look at the abnormally shaped sickle cells under a microscope - a procedure sometimes called a 'sickle preparation'. A further special blood test called a haemoglobin electrophoresis test accurately identifies blood haemoglobins and sickle blood has a characteristic pattern.

It is now possible to do tests for sickle disease on an unborn baby by using an amniocentesis or chorionic villous sampling method. This is performed by an obstetric specialist and the sample of blood or amniotic fluid is DNA analysed for the presence of sickle cell disease. The lung damage in sickle disease - where small areas of lung tissue die due to a lack of oxygen - can be very difficult to distinguish from pneumonia on ordinary chest X-rays and so a special test called an angiogram is sometimes used to try to differentiate between the two, where dye is injected into the affected area of the lung.

The current treatment is primarily aimed at managing the individual features of the disease as they occur. The anaemia usually settles without specific treatment but occasionally the low level can be such that blood transfusion is required in hospital. A sickle crisis is often extremely painful and requires strong analgesics, oxygen and high fluid input - intravenously if necessary. The drug hydroxyurea is sometimes used in a sickle crisis to help relieve the pain but must be closely monitored for side effects as it may be toxic to bone marrow.

In children with sickle disease, pneumonia is one of the commonest reasons for hospital admission and this is usually due to a bacterium called Pneumococcus. Prompt treatment with antibiotics is needed to reduce any complications or life-threatening infection overwhelming the body.

The great majority of people suffering from sickle cell disease suffer repeated attacks of infection, pain crises, anaemia and repeated, progressive damage to internal organs. Most have a reduced life expectancy of the fourth or fifth decade, with bacterial infection being the commonest cause of death at any age. There may be progressive damage to the kidneys, heart, lungs liver and brain, although it is possible for some patients to have virtually no symptoms for months or years at a time - this however tends to be the exception rather than the rule.

It is important to recognise the early signs of sickle disease and report these promptly to your doctor. Genetic counselling is also playing an increasingly important role in helping to reduce the incidence of the disease since if each parent is a carrier of the illness any offspring has a 50 per cent chance of being a carrier and a 25 per cent chance of inheriting both genes being affected with sickle cell disease.

1. How recently did your symptoms start?
2. Have you had similar symptoms before?
3. Do both your parents have sickle disease?
4. Have you had a blood test for anaemia recently?
5. Do you have bad pain?
Ask Your Doctor

1. Will I need to go to hospital?
2. Can my spouse and I have genetic tests before we have any children?
3. How long is it usual to stay in hospital?
4. What are any treatment side effects?
5. Should I keep antibiotics at home in case of infection?