Uterine fibroids are 'knots' or hard 'balls' of muscle fibres that grow in the muscular part of the wall of a woman's uterus, or womb.

They are very common, occurring in about 10% of women in the UK, and can be single or multiple.

Their size varies from miniscule to large, and they can occur in any part of the womb including the cervix.

They always develop during a woman's fertile years, and tend to shrink in size after the menopause, suggesting they grow as a result of exposure to the hormone oestrogen.

What causes Uterine Fibroids?
This is unknown. They are more common in black women, and less common in thin women who have never been pregnant, or who have been on the Pill for at least 10 years continuously.

What Are The Signs And Symptoms Of Fibroid Tumors?

Most women are unaware they have fibroids. They are often discovered by doctors at well-women clinics or during examinations for other conditions. Any symptoms reported are usually of very heavy, painful periods with 'flooding' and the passage of blood clots. There may be abdominal pain or pain on intercourse, and very occasionally there may be fertility problems such as recurrent miscarriages. 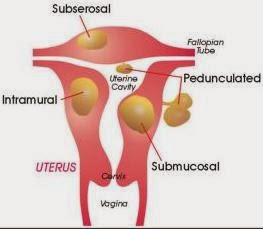 Most fibroids can be felt by a vaginal examination, and present as firm lumps inside the womb. This is usually followed up by an ultrasound scan - such as pregnant women have - which clearly show them up.

This depends entirely on the symptoms they cause since many women with fibroids have no problems whatsoever and so need no treatment. Some specialists may recommend tablet treatment called 'GnRH analogues' which can cause fibroids to shrink, but the most effective treatment remains surgery. This always used to involve a hysterectomy - where the whole womb was removed, but many women are now favouring two newer techniques;

1. Myomectomy - the fibroids alone are removed, leaving the rest of the womb intact. This is a much more difficult operation to perform, and is not undertaken by all consultant gynaecologists as it can sometimes cause heavy bleeding and may not cure the problem of flooding / heavy periods.

2. Endometrial resection - here a special wire fshaves away' the lining of the womb under general anaesthetic. This is often better at stopping the problem of heavy periods but does not remove all of the fibroid.

If there are no symptoms, many ladies never need treatment. Fibroids often gradually enlarge until the menopause, when they begin to shrink back down again. Symptoms may therefore increase and decrease with age.

Although fibroids cannot be prevented, some women with small fibroids find that alternative treatments such as acupuncture, homeopathy or reflexology help their symptoms. If your periods are heavy, ask your doctor if you need to be tested for anaemia.

1. Have your periods become heavier or more painful?
2. Do you pass clots during a period?
3. Do you have any unusual abdominal pain or pain on intercourse?
4. Do you want any more children in the future?
5. Have you had recurrent miscarriages in the past?

1. If I get pregnant, can fibroids be a problem?
2. Can fibroids become cancerous?
3. What side effects do any drug treatments have?
4. Am I still able to have hormone replacement therapy?
5. What do I do if my local specialists are not keen on doing endometrial resections but I would like this as a form of treatment?