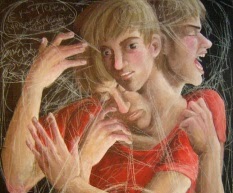 An assessment of patients with adult Tourette syndrome (TS) to identify clinical factors that contribute to psychosocial and occupational disabilities resulting from the vocal or motor tics that define TS found that anxiety/panic disorder may be the most disabling psychiatric condition associated with the disorder.

The results of the study, based on the Global Assessment of Functioning (GAF) scale, will be used to identify patients who are more likely to have or develop significant disabilities related either to the severity of their tics, or to the psychiatric disorders associated with TS, such as obsessive-compulsive disorder, mood disorders and drug or alcohol abuse.

Results were presented at the 14th International Congress on Parkinson's Disease and Movement Disorders, being held in Buenos Aires, Argentina, June 14-17.

David G. Lichter, MD, professor of clinical neurology in the University at Buffalo's School of Medicine and Biomedical Sciences, is first author.

"Our study identified the most significant predictors of disability, says Lichter. "Now having identified these at-risk patients, we can follow them more closely and begin appropriate interventions as early as possible."

Lichter also noted that the finding of anxiety/panic disorder as the most-disabling psychiatric disorder associated with TS was unexpected.

"The main surprise was that depression was not a major predictor of psychosocial or occupational disability in these patients," says Lichter. "Depression has been identified as an important predictor of quality of life in TS.

In most patients, tics wane after mid-to-late adolescence. However, the study data indicates that in those patients whose tics persist into adulthood, tic severity remains the primary factor contributing to global psychosocial and occupational disability, according to Lichter.

In the future Lichter and colleagues plan to collect prospective data on both quality of life and psychosocial and occupational functioning in TS patients.

"We will look more closely at the interactions of tic severity, mood disorders, substance abuse and social support systems and determine how these issues relate to personal and social/occupational adjustment," Lichter says.

"We hope this information will help us improve the lives of our TS patients, especially those who are at highest risk for a poor outcome."