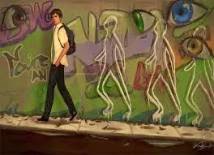 Researchers at the University of Granada have designed a new training program on specific self-efficacy for reducing stress in psychotic patients. When stress was reduced, patients reported an improvement in symptoms, which meant enhancement of their well-being and quality of life. Researchers proved that these patients can improve their quality of life through proper psychological intervention.

To carry out this study, the researchers tested a training program designed by themselves on 14 patients diagnosed with paranoid schizophrenia or schizoaffective disorder. The evolution of patients was evaluated successively three and six months after implementation of the training program. The results were compared to those obtained by a control group that did not receive any training.

This program included 15 training sessions: firstly, patients were trained on general self-efficacy, and secondly on specific self-efficacy to acquire skills to deal with stress. The second training period included sessions to learn to deal with interpersonal difficulties (communication and social skills) and family conflicts, improve discipline with their biomedical/psychological treatments, cope with their symptoms and hallucinations, avoid negative thinking, and prevent and deal with daily stress.

This study was prepared by Maria Luisa Vázquez Pérez, from the Department of Personality, Evaluation and Pshychological Treatment of the University of Granada, and led by professors Juan F. Godoy García y Débora Godoy Izquierdo.

After their participation in the training program, patients' perception of their own specific self-efficacy increased - both their expectations regarding the results after the training, and its efficiency - to deal with stress, and a 171.8% percentage of change was observed. Additionally, a significant reduction in negative, affective, psychotic symptoms, disorientation and confusion was observed. A 171.8% increase of positive symptoms was found.

Further, most of patients reported high levels of wellness (A 22.6% difference between both groups was found, in favour of the group that participated in the training program), and they expressed their satisfaction at the changes attained thanks to the program.

Conversely, patients from the control group did not report any change in their perceived self-efficacy to deal with stress and their psychotic symptoms. Thus, they obtained lower scores than the intervention group in their levels of wellness, areas of change and general satisfaction. The same results were obtained in successive evaluations. Indeed, some improvements were recorded in patients having participated in the training sessions.

The research conducted by María Luisa Vázquez is pioneer in this field, since a training program on specific self-efficacy for coping with stress had never been designed or implemented before.

Schizophrenia
By Health & Medical Reviews and News at Friday, August 06, 2010