How Condoms Protect You - Health And Medical Information

How Condoms Protect You 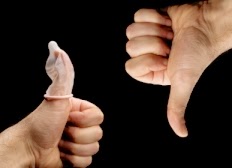 Consistent and correct condom usage can reduce (though not eliminate) the risk of spreading STDs. When considering the different diseases and how effective condoms are in prevention of spreading the infection, it is important to consider:

How is the disease spread from one person to another person? What part of the body does the condom protect?

There Are Two Primary Ways That STDs Are Spread:

The other way is through skin or mucous membrane contact with sores shedding sexually transmissible viruses or bacteria - herpes, syphilis, chancroid and human papillomavirus. These sores aren't limited to the genital or oral areas, so condoms are less effective in stopping transmission.HIV.

Latex condoms used consistently and correctly are highly effective in preventing the sexual transmission of HIV, the virus that causes AIDS. This is good news as HIV is the most deadly of all STDs. Latex condoms provide an essentially impermeable barrier to particles the size of HIV.

In couples where one partner is infected with HIV and the other is not infected, consistent use of condoms has been highly effective in protecting the uninfected partner.

Condoms may reduce the spread of genital ulcer diseases and HPV. These lesions or sores may occur in areas covered by a condom, but frequently, they are located on other parts of the body. If the sore is located on an area covered or protected by the condom, using a condom will reduce transmission rates. Consistent and correct condom use has been associated with a lower risk of cervical cancer.

If the sore is located on a different area of the body - for instance, the buttocks - then the condom will not protect an uninfected partner. Protection against genital ulcer diseases and HPV depends on the site of the sore or ulcer.

Consistent and correct use of condoms is the key for reducing the spread of infections.