What Is Adrenal Fatigue - Health And Medical Information

What Is Adrenal Fatigue 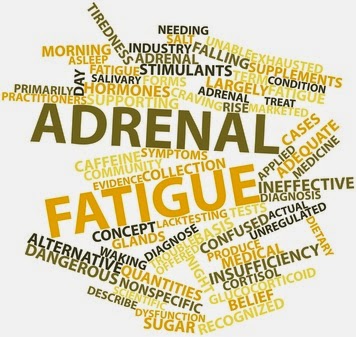 Fatigue and lethargy are some of the most common complaints amongst adult patients. If you have symptoms such as tiredness, fearfulness, allergies, frequent influenza, arthritis, anxiety, depression, reduced memory, difficulties in concentrating, insomnia, worn-out, and the inability to lose weight after extensive effort you may be suffering from Adrenal Fatigue (technically known as hypoadrenia).


Adrenal Fatigue has a broad spectrum of non-specific, yet often debilitating symptoms. The onset of this condition is often slow and insidious. Patients are told that they are stressed and need to learn to relax more. Yes, we all know that "stress kills" to a large extent. But, the question is how?

The real truth is that stress and Adrenal Fatigue are not a mysterious entity at all. Our body has a built-in mechanism to deal with it. Being able to handle stress is a key to survival, and the control center in our bodies is the adrenal glands.


Adrenal Fatigue was first described in the medical texts in the 1800's as a clinical condition. It was one of the most prevalent conditions, afflicting almost every adult in one way or another. Despite effective diagnostic tools and treatment programs, most conventional physicians were simply not informed of Adrenal Fatigue and not prepared to take Adrenal Fatigue as a serious threat to health. This condition was seldom diagnosed as a sickness for the past 50 years. Instead, Adrenal Fatigue was considered a condition whereby no treatment was available other than to tell the person to "relax" and take anti-depressants.

This often makes the condition worse as the root cause is left unresolved. Over time, the condition worsens as the natural progression of this pathology takes its course. Adrenal Fatigue is not a medical condition recognized by mainstream institutions, though it is now being taken seriously by forward looking physicians.

Signs And Symptoms Of Adrenal Fatigue:

* Tendency to gain weight and unable to lose it, especially around the waist.
* High frequency of getting the flu and other respiratory diseases and these symptoms tend to last longer than usual.
* Tendency to tremble when under pressure.
* Reduced sex drive.
* Lightheaded when rising from a horizontal position.
* Unable to remember things.
* Lack of energy in the mornings and in the afternoon between 3 to 5 pm.
* Feel better suddenly for a brief period after a meal.
* Often feel tired from 9 - 10 pm, but resist going to bed.
* Need coffee or stimulants to get going in the morning.
* Cravings for salty, fatty, and high protein food such as meat and cheese.
* Increased symptoms of PMS for women; periods are heavy and then stop, or are almost stopped on the 4th day, only to start flow again on the 5th or 6th day.
* Pain in the upper back or neck with no apparent reason.
* Feels better when stress is relieved, such as on a vacation.
* Difficulties in getting up in the morning.
* Lightheaded.

Other signs and symptoms include:

The adrenal glands are two small glands, each about the size of a large grape. They are situated on top of the kidneys. Their purpose is to help the body cope with stress and help it to survive. Each adrenal gland has two compartments. The inner or medulla compartment, modulates the sympathetic nervous system through secretion and regulation of two hormones, called epinephrine and norepinephrine, which are responsible for the fight or flight response. The outer adrenal cortex comprises 80 percent of the adrenal gland and is responsible for producing over 50 different types of hormones in three major classes - glucocorticoids, mineralcorticoids and androgens.

The most important glucocorticoid is cortisol. When this is lowered, the body will be unable to deal with stress. This happens in Adrenal Fatigue.

Mineralcorticoids, such as aldosterone, modulate the delicate balance of minerals in the cell, especially sodium and potassium. It therefore regulates our blood pressure and the fluid in the body. Stress increases the release of aldosterone, causing sodium retention (leading to water retention and high blood pressure) and the loss of potassium and magnesium in the early stages of Adrenal Fatigue. Magnesium is involved in over 300 enzymatic reactions in the body. When the body lacks magnesium, it will suffer from a variety of pathological conditions such as cardiac arrhythmias.

The adrenal cortex is also responsible for producing all of the sex hormones, although in small amounts. One exception is DHEA, a weak androgenic hormone that is made in large amounts in both sexes. DHEA, together with testosterone and estrogen, are made from pregnenolone.

Pregnenolone also leads to the production of progesterone and is one of the intermediary steps in the making of cortisol. Pregnenolone is therefore one of the most important intermediate hormones being produced in the hormonal cascade. Prolonged deficiencies in pregnenolone, which are found in Adrenal Fatigue, will lead to the reduction of both glucocorticosteroids and mineralcorticoids such as cortisol and aldosterone respectively.

Endocrinology
By Health & Medical Reviews and News at Monday, June 13, 2011