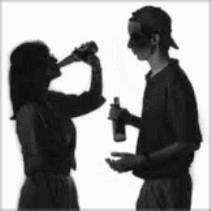 What Is The Impact On Society Of Teenage Drinking?

The British Medical Association (BMA) published a report in September 2009 highlighting concerns about teenage alcohol abuse, following on from a previous report in 2008. 'Under the Influence' advised that not only was there a general rise in the proportion of 11 to 15-year-olds who drink alcohol regularly, but also that there is an increase in the amount they are drinking on each occasion. Alcohol Concern suggested that a third more 11 to 15-year-olds are drinking regularly.

What Are The Health Risks?

It is far easier to work out the health effects of drinking on adults - it is known that heavy drinking over the years is a risk factor for certain cancers, particularly oral and liver, and raised blood pressure which can contribute to heart disease.


'Binge' drinking every now and then tends to be far more harmful to health than drinking a moderate amount occasionally. It has also been suggested that teenagers are more likely to have casual sex if they are regular drinkers.

Doctors think that this effect could be far more pronounced in the young, as alcohol will tend to have more effect on their developing bodies. The increase in the availability of 'designer drinks', the so-called "alcopops" has been accused of making alcohol far more attractive to younger people. Research has shown that it is particularly the 13 to 16 age group that is attracted to the idea of alcopops.

Doctors are worried about an apparent increase in the number of young teenagers who are drinking heavily. While many of the more serious health effects of drinking affect those who have been drinking for many years, it is feared that alcohol abuse during the formative years sets a pattern for later life.

A spokesman for the BMA said:
"There is a need for government action to address the problems of underage and teenage drinking. "This must involve changes to legislation, responsible marketing, effective monitoring of the drinks industry and health education."

What Is Being Done About It?

In Scotland, it is an offence for anyone under 18 to buy alcohol for a person under 18 years old - the BMA would like to see that legislation introduced in England and Wales. In its 2009 report, it also called for the UK government to:

Increase excise duty, and adjust so that it more accurately reflected the strength of the alcoholic product.

Regulate availability of products through reduction in licensing hours for on- and off-licensed premises Undertake a full audit of the market and consider ways to prohibit products that either appeal to young people more than adults, or are associated with problematic drinking.

The use of words such as 'revitalising' in connection with drinks which contain a stimulant such as caffeine as well as alcohol are now banned.