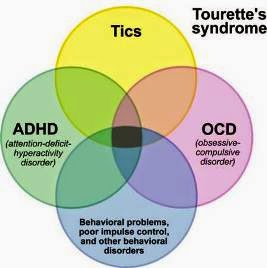 What Is Tourette Syndrome?

A facial tic, such as mouth twitching or rapid eye blinking, is the most common first symptom. Other common early symptoms include involuntary limb tics or involuntary throat clearing or sniffing.

There's no single pattern of symptoms. Some people have very mild symptoms, while others are severely affected. Tics may be classified as:

Simple tics, such as shoulder shrugging, eye blinking, tongue clicking, or sniffing
Complex tics, such as jumping, twirling about, uttering words out of context, or vocalising socially unacceptable words.

TS can be particularly debilitating because the vocal tics can include the uncontrollable use of obscene language (known as coprolalia) and repetition of phrases the person hears others use (called echolalia).

Those with Tourette syndrome often have a variety of psychological problems too, such as attention deficit hyperactivity disorder (ADHD), obsessive-compulsive disorder (OCD) and self-harm behaviour, although the link isn't clear.

The precise cause of the symptoms hasn't been identified. Experts believe the metabolism of the brain chemical dopamine, and possibly other brain chemicals, is responsible. TS may be inherited, or may suddenly appear, which is called 'sporadic Tourette syndrome'. In its inherited form, a child of a person with TS has a one in two chance of inheriting the gene. If they do inherit it they may experience the same symptoms as their parent, a different combination of symptoms or no symptoms at all.

Around ten per cent of those who inherit the gene have symptoms severe enough to need medical treatment. Boys with the gene are more likely to develop symptoms than girls, at a ratio of approximately 3 to 4:1.

Early diagnosis and treatment are essential. The diagnosis is confirmed by observing the pattern of symptoms and, although there's no cure as yet, Tourette syndrome can be treated.

Most people with TS don't need medication, but for those whose symptoms are interfering with their daily life, medication can be used to keep symptoms under control.

For many, psychotherapy or behavioural therapy can be helpful, as can relaxation therapy.

It's important to emphasise that behaviour of people with TS is involuntary, they can't control it and it's not deliberate. This is something many people, including family members, find difficult to come to terms with. Parents and teachers often feel overwhelmed by the behaviour. Support for the family is vital.

A lack of understanding of the condition by others can mean those with Tourette syndrome suffer psychological harm because of ridicule and rejection. Children with TS may be threatened and excluded from usual social activities and find it difficult to form relationships.

Many children with TS are able to attend mainstream schools, with or without extra educational assistance. For those for whom this isn't possible, there are special schools that cater for TS.