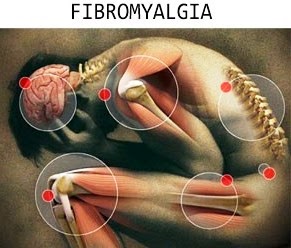 The word fibromyalgia means pain (algia) coming from the muscles (my) and fibrous tissues (fibro) such as tendons and ligaments.

Fibromyalgia, also refered to as fibromyalgia syndrome, is a chronic condition that characteristically causes pain all over the body, including muscle and joint pain, and fatigue as well as other symptoms. Fibromyalgia can lead to depression and social isolation

This is a chronic pain of unknown cause, causing pain, stiffness and tenderness of muscles, joints and tendons. It does not lead to any permanent body damage.

What Is Fibromyalgia Syndrome?

A syndrome is a set of symptoms. When they exist together, they imply the presence of a specific disease or a greater chance of developing the disease.

With Fibromyalgia Syndrome, FMS, the following symptoms commonly occur together:

1 in 25 people develop fibromyalgia at some stage. Most fibromyalgia patients are women ranging in age from 25 to 60. The truth is women are 7 times more likely to get this disease than men. It is less common in young adults and uncommon in children.

The exact cause remains unclear, but research has shown that people with fibromyalgia have certain subtle changes in some chemicals in the brain and nervous system. It is occasionally linked with other illnesses such as rheumatoid arthritis or SLE, but because it does not cause any permanent damage to the body, it is different to most other rheumatological conditions.

Research studies have also shown that people with fibromyalgia tend to have an increased amount of a chemical called substance P in the fluid that bathes the brain and spinal cord (the cerebrospinal fluid (CSF)). This substance may be involved in the way pain messages are transmitted.

A current main theory is that people with fibromyalgia have an oversensitivity to pain signals in the brain. This is called central sensitisation. This may be due to various minor changes in brain chemicals. What triggers or causes these changes is not known.

The main symptom is pain and severity varies from person to person. Pain can be widespread over the body but is most acutely felt in 'trigger points' - localised tender areas which cause pain and muscle spasm when touched. Common sites for these include the back of the head and neck, shoulders, elbows, buttocks and knees although any site can be affected. The other major symptom is fatigue. Because of their discomfort, fibromyalgia sufferers may not be able to get enough restful deep sleep each night and so become chronically tired. This may lead in turn to depression, forgetfulness and poor concentration with tension headaches and symptoms of the irritable bowel also being very common.

Blood tests are often taken to either confirm or deny the presence of any of these possibilities, and so these are usually the only tests performed.

This is highly specific for each individual, and should be tailored to each person. This may involve measures to help reduce general levels of stress, or reduce environmental triggers such as noise and temperature.

Alternate-day low-impact aerobic exercise such as swimming or walking appear to help in most cases, as do traditional antidepressants. These are called tricyclic antidepressants, but in fibromyalgia are used in a very much reduced dosage compared with that used in depressed patients. Taken each night, they appear to reduce muscle pain and spasm as well as helping to promote improved sleep and reduce fatigue. Newer antidepressant such as fluoxetine may be even more beneficial since these do not tend to cause the side effects such as tiredness which tricyclics sometimes do.

Traditional treatments in rheumatic disease such as non-steroidal anti-inflammatory (NSAID) treatment appear to have only limited effects in fibromyalgia, but alternative treatments such as acupuncture may be useful in relieving pain and spasm in trigger points.

Cognitive Behavioural Therapy, CBT may help to ease pain symptoms. But it can also help you to take control of the extent to which pain, tiredness, or other symptoms interfere with living.

Given time and sympathetic treatment, most patients with fibromyalgia find their symptoms gradually settle although this may take many months or even years. They may have a tendency to 'flare' occasionally, especially in times of stress but these also usually slowly settle. As a general rule, the more a patient is involved in their treatment programme decision-making, the better the result.

Avoid alcohol and caffeine in the evenings to try to promote more restful sleep. Many patients find local self-help groups extremely beneficial, and treatment is most effective through a combination of patient education and understanding, exercise, stress reduction and medication.

1. Do you have any 'trigger points' for your pain?
2. Does it affect your sleep?
3. Have you noticed any deformity of your joints?
4. Do you feel depressed?
5. Does noise, stress or changes in temperature cause any worsening of your symptoms?

1. Do I need to see any specialists?
2. Are there any alternative treatments other than acupuncture which may help?
3. Are my children more likely to develop fibromyalgia?
4. Will I make myself worse by continuing to drive?
5. Will any special diet help?

Fibromylagia
By Health & Medical Reviews and News at Thursday, June 12, 2014