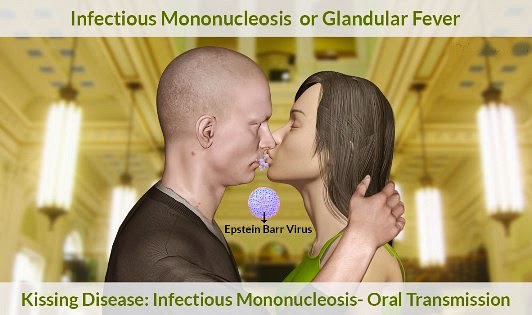 What Is Glandular Fever?

Glandular Fever is a viral infection also commonly known as infectious mononucleosis, 'mono' or 'kissing disease'. It is known as 'infectious mononucleosis' because of its capacity to trigger the body's defences to produce large numbers of white blood cells (called mononuclear cells), seen when the blood is examined under a microscope. It is also know as 'kissing disease' because it's main mode of transmission is through kissing.

Although it can affect all age groups, contracting glandular fever is rare over the age of 60 and it is most common by far between the ages of 10 and 25. There are a number of classical symptoms and it is caused by a particular virus called the Epstein-Barr virus. However, not all people that come into contact with this virus develop glandular fever and so it seems that individual susceptibility to this virus varies considerably from person to person.

The Epstein-Barr virus is a common virus, transferred between people in saliva or in tiny droplets such as occur in sneezing. The virus lives in the mouth and nose of infected individuals and so spread is either by close contact - so that infected droplets are inhaled or, more especially, by kissing.

Sexual intercourse does not cause infection as such (it is not a sexually transmitted disease) but any kissing during sex may. This is why the illness is also sometimes called 'the kissing disease' and also explains why institutions such as schools and colleges are prone to outbreaks of glandular fever, where large numbers of young people spend considerable time in close contact with each other. The usual incubation period from becoming infected to when the symptoms first appear is between 30 and 50 days.

What Are The Symptoms Of Glandular Fever?

In many cases symptoms may be so mild as to be missed completely or passed off as mild 'flu or tonsillitis. After some time with no symptoms, the usual early ones are of a general feeling of listlessness, fatigue and tiredness, and swollen glands in the throat, armpits and groin. This is often accompanied by a sore throat - which may be intense and show a white coating over the tonsils or back of the throat with a high fever and headache.

Following this there is often muscle pain and weakness, with the development of a characteristic rash over the body. There may be two types of rash.

The first type of rash (in 15 - 25% of cases) is a generalised redness around the inner parts of the limbs and trunk that develops into fine pimples that do not contain any fluid. This may persist for up to a week before slowly fading as the other symptoms fade.

The second type of rash is mainly associated with antibiotics, especially a penicillin called Ampicillin that is sometimes prescribed for the sore throat if tonsillitis is thought to be the problem rather than glandular fever. This causes a fairly dramatic red blotchy or patchy rash anywhere on the body and rather than being a true allergic reaction is simply a temporary abnormal reaction to the penicillin, and only occurs while glandular fever is present. This does not mean that the patient will suffer from a penicillin allergy in the future.

In severe cases of glandular fever, or in the elderly, there may be yellow jaundice of the skin and eyes, often associated with nausea that may be linked to drinking tea and coffee. 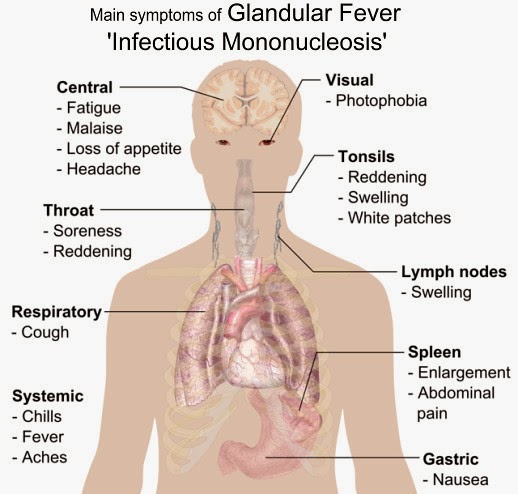 It may be possible to make the diagnosis simply from the history and clinical findings, especially if there is an outbreak of glandular fever in the area at the time. However, many doctors prefer to do a simple blood test called a 'monospot' that detects any abnormal mononuclear cells and proves the diagnosis. This is slightly easier to do than another blood test called a Paul-Bunnell test that also proves glandular fever is present. If there is jaundice, blood tests to check for inflammation of the liver will be taken at the same time. Throat swabs may also be taken if there is any clinical doubt but blood tests remain the core of any tests performed, with results usually being available within 24 - 48 hours.

There is no specific medical treatment in the form of a tablet or injection. Rather, it is a case of treating the symptoms supportively while the body repairs itself. For the sore throat, warm soluble aspirin gargles are effective at easing the throat discomfort and paracetamol will help any high temperature and muscle aches and pains. It is important to drink more fluid than normal when a fever is present to avoid becoming dehydrated and large amounts of rest are advisable and even necessary in severe cases. In such cases, if the swelling of the throat is such that swallowing is restricted then small doses of steroids may be prescribed to ease this problem, although nothing will reduce the duration of the illness itself. Women who contract glandular fever and who take the contraceptive pill should stop taking the Pill until their illness has settled since this may occasionally worsen any liver inflammation that is present.

Because of the (often severe) fatigue, it may be several months before a patient with glandular fever feels fully restored to normal. It usually takes 2 to 4 weeks to begin to resolve without any complications but, in under 5% of cases, these may develop and include pneumonia, anaemia, rupture of the spleen (0.1% of all cases) and meningitis. If very mild there may be no need to take any time off work or school but most people find they need a few weeks of rest at home to recover. Remember that the period of convalescence in glandular fever is longer than that of most other infectious illnesses but once you have had glandular fever you have a life-long immunity to it and will not catch it again.

How Can I Help Myself?

Because of the tiny risk of damage to the spleen, avoid any kind of contact sports or exercise for at least four weeks after the disease has finished and only start when you feel well again. It is sensible to avoid alcohol for three months or so after infection and to resume physical activity slowly, resting whenever you feel you have become over-tired or if you develop a fever. Eat a sensible well-balanced diet, rich in fresh fruit and vegetables and remember that you will get better quicker in the long run by taking things gently initially. If you are still having problems after three months, ask your GP to check you over and give you an idea how long it may be before you are feeling fully fit again.

1. When did your symptoms first develop?
2. Have you been in contact with anyone suffering from glandular fever?
3. Have you gone yellow at any time recently?
4. Is your throat sore?
5. Are you more tired than usual?

1. How am I likely to have caught this?
2. Do I have a severe or mild case of glandular fever?
3. Do I need any further investigations or tests?
4. When can I go back to work/college/school?
5. Will supplements or vitamins be of any help?