Symptoms Of Insect Bites And Stings - Health And Medical Information

Symptoms Of Insect Bites And Stings

A small hole, or the sting itself, may also be visible. The lump may have an inflamed (red and swollen) area around it that may be filled with fluid. This is called a weal.

Insect bites and stings usually clear up within several hours and can be safely treated at home. 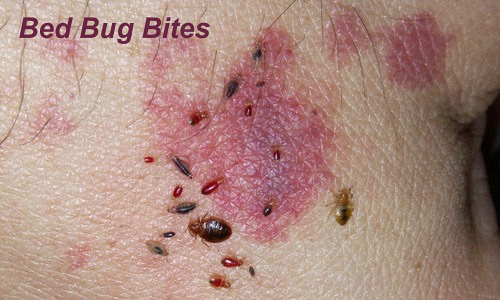 The symptoms that can occur from different types of insect bites are listed below.

Flea bites can be grouped in lines or clusters. If you are particularly sensitive to flea bites, they can lead to a condition called papular urticaria (where a number of itchy red lumps form). Bullae may also develop.

Fleas from cats and dogs can often bite below the knee, commonly around the ankles. They may also affect the forearms if you have been stroking or holding your pet.

A bite from a horsefly can be very painful. As well as the formation of a weal around the bite, you may experience:

Horseflies cut the skin when they bite, rather than piercing it, so horsefly bites can take a long time to heal and can cause an infection.

Bedbug bites often occur on your:

The Blandford fly (sometimes called blackfly) is found in:

Blandford fly bites are common during May and June. They often occur on the legs and are very painful. They can produce a severe, localised reaction (a reaction that is confined to the area of the bite), with symptoms such as:

Tick bites are not usually painful and sometimes only cause a red lump to develop where you were bitten. However, in some cases they may cause:

Ticks can carry a bacterial infection called Borrelia burgdorferi, which causes Lyme disease. If Lyme disease is not treated, it can be serious.

Mites cause very itchy lumps to appear on the skin and can also cause blisters. If the mites are from pets, you may be bitten on your abdomen (tummy) and thighs where the pet has been sitting on your lap. Otherwise, mites will bite any uncovered skin.

Spider bites are rare in the UK, and tend to be more likely abroad, through keeping an exotic pet, or handling goods from overseas.

Spider bites leaves small puncture marks on the skin and can cause:

A wasp or hornet sting causes a sharp pain in the area you are stung and usually lasts just a few seconds.

A swollen, red mark will often then form on the skin, which can be itchy and painful.

At first, a bee sting feels similar to a wasp sting.

However, if you are stung by a bee, it will leave its sting and a venomous sac in the wound. You should remove this immediately by scraping it out using something with a hard edge, such as a bank card.

Do not pinch the sting out with your fingers or tweezers because you may spread the venom.

Most people will not have severe symptoms after an insect bite or sting but some people can react badly to them. You are more likely to have an allergic reaction if you are stung by an insect.

The reaction can be classed as:

• A minor localised reaction - this is normal and does not require allergy testing, although the affected area will often be painful for a few days
• A large localised reaction (LLR) - this can cause other symptoms such as swelling, itching and a rash
• A systemic reaction (SR) - this often requires immediate medical attention as it can cause a potentially life-threatening allergic reaction (anaphylaxis)

Although insect bites and stings are a common cause of anaphylaxis, it is rare to experience anaphylaxis after an insect sting, and it is rarely fatal.

Large localised reactions and systemic reactions are described in more detail below.

If you have an LLR after being bitten or stung by an insect, a large area around the bite or sting will swell up. The area may measure up to 30cm (12in) across, or your entire arm or leg could swell up.

The swelling will usually last longer than 48 hours but should start to go down after a few days. This can be painful but the swelling will not be dangerous unless it affects your airways.

If you are bitten or stung many times by one or more insects, your symptoms will be more severe because a larger amount of venom will have been injected.

You may have an LLR several hours after being bitten or stung. This could include:

If you have any of the following symptoms after being bitten or stung call 999 immediately and ask for an ambulance:

It is rare for an SR to be fatal, especially in children, although someone with an existing heart or breathing problem is at increased risk.

Dermatology
By Health & Medical Reviews and News at Sunday, December 13, 2015