E-Cigarette Users at Risk of Brain and Heart Damage 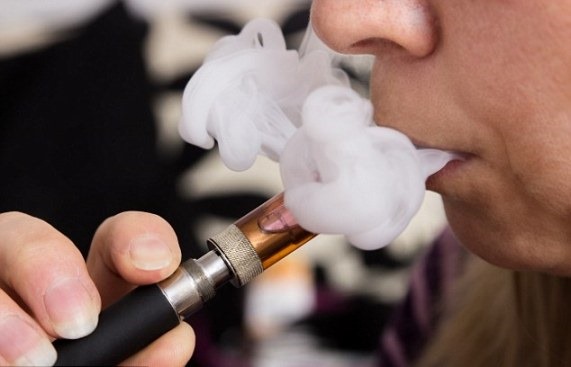 E-cigarette users are inhaling significant amounts of lead and other toxic metals linked to heart and brain damage with each puff on their devices, a new study warns.

The last several years have seen a surge in vaping - especially among teenagers and young adults - as health officials, doctors and even tobacco companies have touted it as a safer alternative to cigarette smoking.

- E-cigarette vapor contains dangerous levels of toxic metals including lead, chromium and manganese, a Johns Hopkins study found.
- These substances raise risks of cancer, heart disease and brain damage.
- The authors warn that the levels of metals vapers are inhaling may well be even higher than the medians they measured in their study.

But, many experts have cautioned that the health effects of vaping remain largely unknown.

As e-cigarettes become more popular, research on their health effects is slowly emerging.

Vaping is thought to be as much as 95 percent safer than cigarette smoking, but mounting evidence suggests that the devices could still pose serious risks.

Most studies thus far have focused on the flavored 'e-liquids' that fuel the devices. Some of these have shown that certain flavors - particularly the sweet ones popular with teenagers - contain toxins that can damage white blood cells and raise cancer risks.

Part of the purported safety advantage of e-cigarettes over combustible tobacco is that they use liquid vapor instead of smoke from burning plant, paper and chemical products.

But their heating mechanisms - battery-powered atomizers, or heating coils - have been the subjects of little research.

In the new study, published in Environmental Health Perspectives, the researchers examined the health effects of the heating coils that power e-cigarettes.

They tested the smokeless devices of 56 people who vaped daily.

First, they tested the levels of 15 different metals in the e-liquid dispensers where the substance is contained on the device and in the tank where the liquid is filtered to be heated and vaporized.

They also measured the amount of levels in the heated vapors produced by the e-cigarettes.

WHAT PARENTS NEED TO KNOW ABOUT E-CIGARETTES

E-cigarettes use a mixture of flavored liquids and nicotine to create a vapor.

This vapor is then inhaled by the user similarly to how one would smoke a regular cigarette.

Are these devices safe?

Since these devices don't use traditional smoke, people are under the assumption that they are safe for you.

But the liquid in the e-cigarettes can contain harmful toxins and carcinogens including anti-freeze.

The nicotine in the e-cigarettes also had addictive components and can lead to other tobacco use. This can hinder brain development in teens.

Also, the devices can overheat and explode if defective.

The Food and Drug Administration does not certify e-cigarettes as a product to get over smoking regular cigarettes.

The levels of metals in the dispensers - where the e-liquid is kept before it is heated - were nominal and of little concern.

But once the liquid reached the tank where it was exposed to the heating coil, levels spiked significantly.

But most worrisome were the types and quantities of metals found in the vapor that the e-cigarette-users were liberally puffing on every day.

The vapor had high levels of lead, chromium, nickel and manganese.

Nearly half of the e-cigarettes were producing vapor with lead concentrations over the maximums considered safe by the Environmental Protection Agency (EPA).

'These were median levels only,' says senior study author Dr Ana María Rule. 'The actual levels of these metals varied greatly from sample to sample, and often were much higher than safe limits.'

It can stay dormant in teeth and bones, and be reactivated during pregnancy, seeping into the blood where it can reach and poison a developing fetus with the potential to cause significant brain damage.

They also found high levels of arsenic - which can cause many illnesses, including cancer - in vapor from 10 of the e-cigarettes, though it is unclear how it found its way into the vapor.

'It's important for the FDA, the e-cigarette companies and vapers themselves to know that these heating coils, as currently made, seem to be leaking toxic metals - which then get into the aerosols that vapers inhale,' Dr Rule says.

'We've established with this study that there are exposures to these metals, which is the first step, but we need also to determine the actual health effects,' she added.