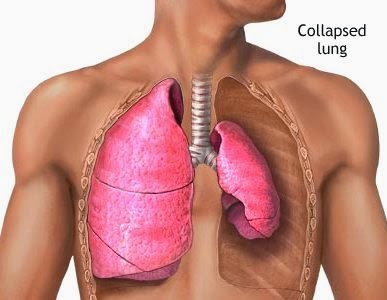 What Is Pneumothorax (Collapsed Lung)?

The lungs are lined with a double layer of membrane (pleura) , the inner one covering the lung surface and the outer one covering the inside of the chest wall, separating them from the chest wall. If air gets between these two layers, into what is known as the pleural space, it's called a pneumothorax. Once air is drawn into this space, it cannot easily escape and the air compresses the lung and interferes with the mechanics of breathing. This makes the lung collapse, causing chest pain and making breathing difficult.

* Chest pain and tightness
* Shortness of breath and
* Dry cough

The severity of symptoms depends on how much air gets into the space.

In a particular type, called a tension pneumothorax, which is a medical emergency, the air gets into the space but cannot escape at all, and with each breath more air is drawn in. Under these circumstances, chest pain and shortness of breath are severe and may rapidly worsen as the lung and chest contents are compressed.

Blood is prevented from returning from the lungs to the heart because of the high pressure caused by the trapped air. This results in low blood pressure and collapsed lungs.

Most commonly air gets into the space when a little air sac on the surface of the lungs, called a bulla, which has been present from birth, bursts. Vigorous exercise, for example, may cause it to burst, allowing the air to escape from the lung. This is called a ‘spontaneous pneumothorax’

Air may also escape from the lung into the pleural space as a complication of other lung problems such as asthma and chronic obstructive pulmonary disease, or the rare connective tissue disease Marfan syndrome.

In a ‘traumatic pneumothorax’ air may also get into the pleural space from outside the body. This may be caused by a traumatic penetrating chest injury, such as a stabbing, by broken ribs or when surgical operations are performed on the chest. Tall, thin, fit men are most often affected. Pneumothorax is six times more common in men than women, and usually occurs in their 20s or 30s.

In the vast majority of cases only one lung is affected at a time, although very rarely both are. There are reports of sportsmen such as weight-lifters suffering pneumothoraces on both sides at the same time.

After a pneumothorax, there's approximately a one in five chance of it happening again within a year. Those who smoke are at greater risk.

Pneumothorax can be confirmed by an x-ray of the lungs, although symptoms, and an examination of the chest with a stethoscope usually point towards the diagnosis. Small ones will clear without treatment over a few days as the body heals the leak and the air is gradually absorbed.

A larger pneumothorax needs to have the air drawn out to relieve the symptoms. This is done in hospital with a syringe and needle, or by placing a drainage tube into the space to allow the air to come out again. This is called a chest drain and is inserted under local anaesthetic. It may need to stay in place from between a couple of days to a few weeks, until the lung heals.

With a tension pneumothorax, the air is released by putting a large bore hollow needle directly into the chest. Immediate relief of symptoms follows.

If air continues to find its way between the pleural layers a process called pleurodesis is used. This uses a chemical irritant to stick the two layers of pleura together, preventing further lung collapse.

Respiratory
By Health & Medical Reviews and News at Wednesday, March 09, 2011