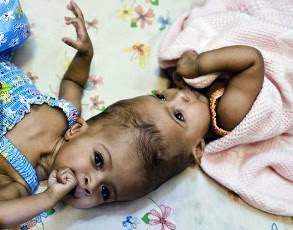 What Are Conjoined Twins?

The term siamese twins was coined as a reference to Eng and Chang Bunker, who achieved international fame following their birth in what was then Siam in 1811. They were exhibited in circus side shows around the world before settling in the United States and marrying two sisters. They lived 63 years, with Chang fathering 12 children and Eng 10.

In the UK an annual celebration was held for centuries to commemorate 12th century siamese twins Mary and Eliza Chalkhurst, wealthy sisters who bequeathed a fortune to the church.

Aiofe and Naimh McDonnell, from County Kildare, were born in June 1997 sharing a liver, kissing each other because of the way they were joined. Surgeons took seven hours to separate them in an operation at Great Ormond Street. The twins are now living a healthy life in Ireland.

Siamese, or conjoined, twins are extremely rare, occurring in as few as one in every 200,000 births. The twins originate from a single fertilised egg, so they are always identical and of the same sex. The developing embryo starts to split into identical twins within the first two weeks after conception. However, the process stops before it is complete, leaving a partially separated egg which develops into a conjoined foetus.

The birth of two connected babies can be extremely traumatic and approximately 40-60 per cent of these births are delivered stillborn with 35 per cent surviving just one day.

The overall survival rate of conjoined twins is somewhere between 5 per cent and 25 per cent. Historical records over the past 500 years detail about 600 surviving sets of conjoined twins with more than 70 per cent of those surviving pairs resulting in female twins. If they have separate sets of organs, chances for surgery and survival are greater than if they share the same organs.

Over the years, survival rates have improved as a result of more accurate imaging studies and better anaesthetic and operative techniques.