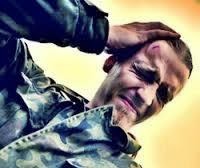 Focusing on certain PTSD symptoms may be key to treating anger among Iraq/Afghanistan Veterans, according to a study by University of North Carolina at Chapel Hill and Veterans Affairs researchers.

"Most returning veterans don't have PTSD or difficulty with anger or aggressiveness, but for the small subset who do, this study helps to identify related risk factors," said Eric Elbogen, PhD, lead author of the study, an assistant professor of psychiatry in the UNC School of Medicine and a staff psychologist at the VA Medical Center in Durham, N.C.

"The data showed that PTSD symptoms such as flashbacks or avoiding reminders of a trauma were not consistently connected to aggressiveness," said Elbogen. "Instead, we found that post-deployment anger and hostility were associated with PTSD hyperarousal symptoms: sleep problems, being 'on guard,' jumpiness, irritability, and difficulty concentrating."

From interviews with 676 veterans, Elbogen and VA colleagues identified features associated with anger and hostility, which result in increased risk of post-deployment adjustment problems as veterans transition to civilian life.

Veterans who said they had difficulty controlling violent behavior were more likely to report witnessing pre-military family violence, firing a weapon during deployment, being deployed more than 1 year, and experiencing current hyperarousal symptoms. There was an association with a history of traumatic brain injury, but it was not as robust as the relationship to hyperarousal symptoms. Elbogen said, "Our data suggest the effects of traumatic brain injury on anger and hostility are not straightforward."

Veterans with aggressive urges were more likely than others to report hyperarousal symptoms, childhood abuse, a family history of mental illness, and reexperiencing a traumatic event. Difficulty managing anger was associated with being married, having a parent with a criminal history, and avoiding reminders of the trauma, as well as hyperarousal symptoms.

"As we learn more about risk factors and how to manage them, we'll be helping not only the veterans but their families and society at large. Veterans with these adjustment problems should seek help through the VA so we can best serve those who have served our country" Elbogen said.

The study will appear on June 15 at AJP in Advance, the online advance edition of The American Journal of Psychiatry (AJP), the official journal of the American Psychiatric Association.

Funding for this study was provided by the Department of Veterans Affairs, the University of North Carolina at Chapel Hill and the National Institute of Mental Health.